Khazer IDP camp, Iraq – Huda Mahmood Ali’s children often ask her why they cannot go to school like the other children.

“They love to go to school, sometimes they go to the classes anyway and the teachers kick them out because they are not registered,” she says. “I’m afraid my children have no future.”

The 34-year-old mother has tried to explain to her five undocumented children that it is simply because their IDs were lost when they fled their home in July 2017.

“We were running from Mosul, I was carrying the children and lost the bag that had all my documents and IDs in it. I wasn’t concentrating on it. Everyone was running,” Huda says.

Life in the margins

There are about 45,000 internally displaced children in Iraq who lack civil documentation, according to a report by the Norwegian Refugee Council (NRC).

This figure takes into account only children in displacement camps who do not have birth certificates; given that there are an estimated 870,000 displaced children around the country, the total number of undocumented children is thought to be far higher.

These children have either lost their Iraqi government-issued identification, as Huda’s children did, or only have birth certificates issued by the Islamic State of Iraq and the Levant (ISIL or ISIS) because they were born in areas controlled by the group, the report outlines. In some other cases, the Iraqi security forces may have confiscated documents due to perceived affiliation with ISIL, while many parents had their documentation taken by ISIL.

Without Iraqi documentation, thousands of children are unable to access healthcare, education and freedom of movement within their own country.

As they grow up, this lack of documentation puts them at risk of not having their marriages recognised and not being able to find work and housing.

For Huda, who lives in the Hamam al-Alil IDP camp near Mosul with her five children and their two half-siblings, it will be impossible to apply for new identification papers for her children.

Her husband is missing, presumed dead, and she has lost her marriage certificate.

“I can’t prove my husband is dead and, as long as there is no death certificate, the father has to be present to get the children’s IDs,” she says.

Most of the children who do not have birth certificates are unable to receive healthcare. One official told NRC that in Hawija, Kirkuk province, newborns without documentation were not able to receive vaccinations.

As a result, diseases that had disappeared before ISIL, such as leishmaniasis, scabies and measles, have reportedly reemerged in the area.

Huda is grateful that her undocumented children – Nadher Younis, 9, Ahmad, 8, Jileena, 6, Mahmood, 5 and Hamad, 4 – were vaccinated before they fled Mosul.

“But now, if anything goes wrong they will not receive health assistance,” she says.

Undocumented children are also unable to enrol in school, as the IDs of both the student and their parents are required.

Even if they were able to attend classes, they would not be able to sit exams or be issued graduation certificates.

Although the Ministry of Education issued a directive in 2018 allowing the registration of undocumented children in schools across Iraq, the NRC said a recent study found that nearly one in five families with documentation issues were struggling to register their children in school.

Iraq’s parliamentary speaker recently said there was a proposal to open civil registries for a limited period, in order to register undocumented children, but that there was little appetite to change the country’s laws.

Parents and children without IDs face an additional stigma: Iraqi security forces and the community commonly perceive them to be affiliated with ISIL.

Because Huda’s husband is missing and his cousin and brother were affiliated with ISIL, it is assumed that he is also involved with the group.

She stresses that her husband was never affiliated with ISIL. “These accusations hurt us a lot and we feel like we have no value.”

Thirty-year-old Sara Khalid Ahmad’s husband is an ISIL fighter, something that has complicated matters for her in the Khazer IDP camp, halfway between Erbil and Mosul, where she lives with her five children.

Sara’s youngest child, Husin, was born in a house in west Mosul during the battle to retake the city from ISIL, so she has no birth certificate.

Now Sara needs to present witnesses in court to prove that Husin is her child.

“Because my husband was with ISIL, no one dares to help me, no friends or family members will be a witness of the birth,” Sara explains to Al Jazeera.

“People are afraid of the intelligence and the government,” she adds.

Sara went on to describe going to the Iraqi authorities seeking IDs for her children: “They were saying ‘you are with ISIL and you still want IDs?'”

Asked if she ever thought her husband being a member of ISIL would affect her children, Sara said she never expected they would be marginalised.

Her sister-in-law, Amira Hussein Ahmad, was left to care for six children after her husband, who joined ISIL, was killed in the fighting.

Her youngest child, two-year-old Abed al-Menaem, only has an ISIL-issued birth certificate, which is not recognised by the Iraqi government.

Whether families are perceived to be affiliated with ISIL or their relatives were associated with the group makes no difference – their children cannot be issued IDs.

While the NRC provides legal assistance to displaced families applying for civil documentation, their legal team receives an average of 170 cases a month they cannot help with because of ISIL affiliations.

NRC media coordinator for Iraq, Tom Peyre-Costa stressed that the Iraqi government needs to change its policy towards ISIL-affiliated families as the current treatment constitutes collective punishment, which is against international law.

“If you punish the wife or children of an ISIS fighter, you’re punishing an entire family,” Peyre-Costa told Al Jazeera.

“Children have nothing to do with the crime of their father.”

In a best-case scenario for the children, if their father is alive, their mother still has her documents and both are able to apply for new IDs, the process could take up to six months.

Many of the Civil Directorate offices have been destroyed in the war, were closed or are under-resourced, making the application process itself a hurdle for IDPs.

In addition, the cost of transport to these offices, on average IQD40,000 ($33) per person, is a problem for many IDPs – they simply cannot afford it.

Amira told Al Jazeera she doesn’t have the money to leave the camp in order to go and apply for her children’s IDs.

For those families who do have the money, the numerous checkpoints set up throughout Iraq make travel between cities difficult for undocumented individuals.

Between the Hamam al-Alil camp, where Huda and her children live, and Mosul there are five checkpoints she would need to travel through to get to a Civil Directorate office.

As no one can cross a checkpoint without ID, she runs the risk of arbitrary arrest or detention, which further deters people from making the journey.

The marginalisation of children from an early age – excluding them from education and healthcare – and then later in life – not being able to marry or have a job – could have long-term implications for the country’s social fabric, according to Peyre-Costa.

“Obviously this [marginalisation] will create tensions between communities,” he says.

“This is always fertile ground for any kind of extremist ideology, so reconciliation-wise, it’s the worst you can do.” 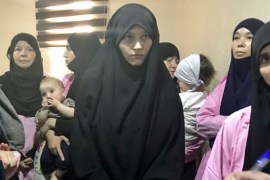 Fathers of the children were killed during three years of fighting as mothers face execution or Iraqi prisons. 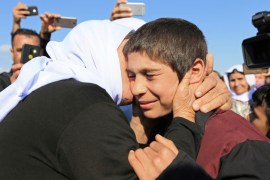 Yazidis to accept ISIL rape survivors, but not their children

Children of women raped by ISIL men will not be accepted into Yazidi community, say the sect’s faith leaders.