The elusive chief of the Islamic State of Iraq and the Levant (ISIL or ISIS) group Abu Bakr al-Baghdadi has appeared for the first time in five years in a propaganda video released by the armed group.

ISIL’s Al Furqan media network published on Monday what it said was a video message from its leader, in which he said the group would seek revenge for the killing and imprisonment of its fighters.

It was unclear when the footage was filmed but al-Baghdadi referred in the past tense to the months-long fight for Baghouz, ISIL’s final bastion in eastern Syria, that ended last month.

“The battle for Baghouz is over,” said the ISIL leader with a bushy grey beard and an assault weapon close by, sitting cross-legged on a cushion and addressing three men whose faces had been blurred.

Wearing a black robe with a beige vest, al-Baghdadi gave an 18-minute address.

The SITE Intelligence group said he also discussed the bombings in Sri Lanka that killed more than 250 people on Easter Sunday in an audio recording after the video ends.

“Your brothers in Sri Lanka have healed the hearts of monotheists [ISIL members] with their suicide bombings, which shook the beds of the crusaders during Easter to avenge your
brothers in Baghouz,” he said.

This was his first appearance in a video since delivering a sermon at the Great Mosque of al-Nuri, in Mosul, Iraq, in 2014. That speech marked the rise of the group and its self-declared “caliphate” in Iraq and Syria.

In January of the same year, ISIL took the Syrian city of Raqqa as its de-facto capital. By June, the group had also captured Iraq’s second city of Mosul, with a population of two million people. It held both cities until 2017.

At its peak in January 2015, ISIL controlled an area across Syria and Iraq roughly equivalent to the size of the United Kingdom and had attracted 40,000 fighters to its cause.

With a $25m US bounty on his head, al-Baghdadi is the world’s most wanted man. Despite numerous claims about his death in the past few years, his whereabouts remain a mystery.

“Our battle today is a war of attrition to harm the enemy, and they should know that jihad will continue until doomsday,” al-Baghdadi said in the video.

The written script at the start of the video dated it to earlier in April. The authenticity and date of the recording could not be independently verified.

Al-Baghdadi has periodically issued audio statements. His last voice recording to supporters was released in August 2018 – eight months after Iraq announced it had defeated ISIL and US-backed forces closed in on the group in Syria.

In the video published on Monday, he insisted ISIL’s operations against the West were part of a “long battle” and the group would “take revenge” for its members who had been killed.

“There will be more to come after this battle,” said al-Baghdadi, apparently referring to the final fight in Baghouz.

Over the years, several armed groups outside the Middle East, including in parts of Africa and Southeast Asia, have pledged allegiance to ISIL, claiming devastating attacks on both civilians and security personnel.

The United Nations in 2016 said at least 34 groups from around the world had pledged allegiance to the group.

Judit Neurink, journalist and author of The War of ISIS: On the Road to the Caliphate, said the video would send an important message to ISIL’s fighters that al-Baghdadi was “still there” at the head of the group.

Nader Hashemi from the University of Denver said al-Baghdadi is trying to capitalize on the Sri Lanka massacre to draw attention to ISIL’s continued threat despite its defeat in the Middle East.

“This is also a huge embarrassment for Donald Trump’s administration. Just a few weeks ago, Trump was claiming, ‘mission accomplished’ and ‘the war is over’. This video clearly sends a message to the Americans – and Trump in particular – that the head of the organisation is very much alive,” Hashemi told Al Jazeera. 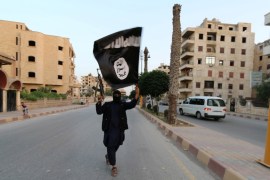 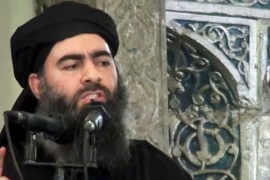 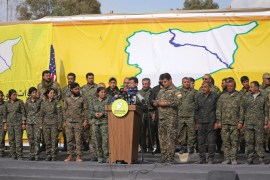 ‘Taste of victory’ for SDF, but ISIL threat remains