The United States acted in “bad faith” in Vietnam where President Donald Trump and his team held talks with North Korea, its leader Kim Jong Un said during a summit with Russian President Vladimir Putin.

Trump and Kim met in Hanoi in February but the talks ended abruptly and a joint-signing ceremony was cancelled. Trump said North Korea’s demand that the US lift economic sanctions in their entirety forced his team to walk away from reaching an agreement. North Korean officials denied they demanded sanctions to be removed entirely.

On Thursday, at his first summit with Russia’s Putin in the far eastern Russian port of Vladivostok, Kim said “the situation on the Korean Peninsula and the region is now at a standstill and has reached a critical point”, the Korean Central News Agency reported.

“Peace and security on the Korean peninsula will entirely depend on the US future attitude, and the DPRK will gird itself for every possible situation,” KCNA quoted Kim as saying.

Russia has already called for the sanctions to be eased, while the US has accused it of trying to help Pyongyang evade some of the measures – accusations Moscow denies.

Just a week ago, Pyongyang demanded the removal of US Secretary of State Mike Pompeo from the stalled nuclear talks, accusing him of derailing the process.

On Thursday, Putin emerged from the meeting saying that like Washington, Moscow supported efforts to reduce tension on the Korean Peninsula and prevent nuclear conflicts.

But he also insisted that the North needed “guarantees of its security, the preservation of its sovereignty”.

“We need to… return to a state where international law, not the law of the strongest, determines the situation in the world,” said Putin.

Analysts say the true purpose of Kim’s visit to Russia was a chance to leave himself some wiggle room when talks with the US resume – and to use Russia as the bogeyman if Trump goes too far with his threats.

“This is the breakthrough the [North] Korean side needed to tell the US: ‘Look, we have normal ties with Moscow, if something happens, we will run to them for protection, stop waving your fists,'” Dmitry Zhuravlev, director general of the Institute of Regional Issues, a Moscow think-tank, told Al Jazeera.

Moscow still has veto power in the United Nations Security Council, and it wants to play a role in anything related to North Korea.

The nations share a border, and Russia serves as a workplace for at least 10,000 North Korean labour migrants, an important source of hard currency for Pyongyang.

Russia does not want a nuclear disaster next door, but its interest in the disarmament of North Korea is limited; the fall of the Kim dynasty would likely mean that a unified Korea becomes a US ally, and American military bases could appear next to Russia’s Pacific provinces.

The meeting was Kim’s first with another head of state since returning from Hanoi.

It followed repeated invitations from Putin after Kim embarked on a series of diplomatic overtures last year.

Since March 2018, the North Korean leader has held four meetings with Chinese President Xi Jinping, three with South Korea’s Moon Jae-in, two with Trump and one with Vietnam’s president.

Putin told reporters that he would fill in Washington on the results of the talks.

“There are no secrets here, no conspiracies … Chairman Kim himself asked us to inform the American side of our position,” said Putin. 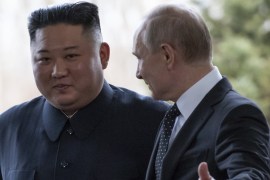 Kim and Putin: Challenging the US role in denuclearisation

Russia does not want a nuclear disaster next door, but its interest in the disarmament of North Korea is limited. 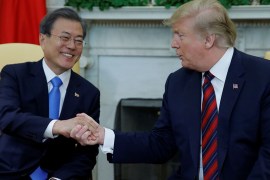 Trump says sanctions on North Korea to stay in place

In meeting with South Korea’s Moon, Trump says it’s ‘not the right time’ to ease sanctions on Pyongyang.