A group of armed French nationals intercepted along the Tunisia-Libya border last week are members of France‘s intelligence services, according to an unnamed source in Tunisia’s presidency who was quoted by Radio France International (RFI).

Tunisia’s government denied the story, which came amid reports suggesting French citizens may have assisted renegade military commander Khalifa Haftar as his forces attempt to capture the Libyan capital, Tripoli.

The French citizens tried to enter Tunisia along the Ras Jedir crossing “under diplomatic cover with arms and ammunition”, a defence ministry statement said.

Al Jazeera has obtained passport copies of the French team arrested in Tunisia.

The French embassy in Tunis said at the time the individuals were members of a security detail attached to the French diplomatic mission in Libya, and the movement was part of a routine transfer of staff between Tripoli and Tunisia.

Quoting a “well-placed source” at Tunisia’s presidential palace, Radio France International reported the men were not diplomats as claimed but instead intelligence agents.

“These actions undermine our sovereignty. There is a lot of back and forth to Libya,” the source was quoted as saying.

“The Tunisian presidency categorically denies the statements reported by RFI and attributed to a well-placed source at the presidential palace of Carthage concerning the passage of French diplomats through the border post of Ras Jedir.

“Such remarks are likely to undermine Tunisia’s national security and good relations between Tunisia and France,” it said.

The French radio station also reported that 15 French intelligence officers had arrived in the city of Gharyan, 100km southwest of the Libyan capital, in mid-February to aid Haftar in his preparation for the attack on Tripoli, according to a Libyan source close to the government.

The source said the move prompted the Libyan government to end all cooperation with France.

While France has rejected the accusations, Libya’s internationally recognised interior ministry announced last week that it had suspended “all relations between the ministry and the French side … due to the position of the French government in support of the criminal Haftar”.

Libya, which has been mired in chaos since the NATO-backed toppling of Gaddafi in 2011, has been split into rival eastern and western administrations since 2014.

Haftar launched the ambitious military campaign in early April to capture Tripoli, where Libya’s UN-recognised Government of National Accord (GNA) is based.

Analysts say Haftar’s push on the capital threatens to further destabilise the oil-rich country and reignite a full-blown civil war.

While France officially supports the Tripoli-based government, it has also provided Haftar with financial, military and intelligence support in recent years.

Mustafa Fetouri, a Libyan academic based in Paris, cast doubt on the official French explanation for the border incident.

“This particular incident is very unclear. The French claim that it is the guard of the embassy in Tripoli, but the building itself is closed – there are no operations there. The French government only recently allowed its employees, including the aid services, to go back to Libya,” he told Al Jazeera.

Libyan journalist Abdullah al-Kabir suggested the group of armed French nationals belong to a French military team that supports Haftar, adding if they were diplomatic staff they would have attempted to leave Tripoli through official means. 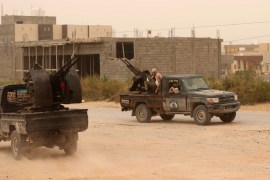 Around 32,000 people displaced, as UN deputy envoy warns hostilities likely to continue ‘for some time’. 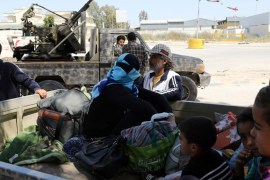 WHO: Death toll in Libya clashes rises to 264 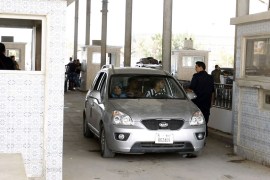 Armed Europeans try to cross from Libya to Tunisia