Explosions rocked Libya‘s capital Tripoli following air raids in an escalation of a two-week offensive by eastern forces on the city held by the internationally recognised government.

Powerful blasts, believed to be caused by air strikes, were reported on Sunday across Tripoli’s southern districts, with residents saying they saw an aircraft circling for more than 10 minutes over the city before opening fire on a southern district.

It is unclear whether an unmanned drone or fighter jet was behind the air attack.

Residents reported drone attacks in the past days, but there has been no confirmation. They said explosions heard in the city centre this time were louder than in previous days.

Government of National Accord spokesman Mustafa al-Mejii told AFP news agency on Sunday that “after a long day of military success, our forces are consolidating their [new] positions”.

Some witnesses spoke of drone strikes, but Mejii said the blasts were caused by air raids from Libyan National Army (LNA) helicopters aimed at “terrorising civilians”.

He said they had not caused any casualties but had taken place away from the frontlines, without offering any further details.

Military sources said the ageing Soviet and Russian fighter jets used by both sides are not equipped to carry out night time strikes, but Mejii said Haftar’s forces have a helicopter with night vision capabilities.

Libya has for years been split between the Tripoli-based Government of National Accord (GNA) in its west and a rival administration in the east allied to renegade General Khalifa Haftar.

Haftar’s LNA launched the offensive to seize Tripoli on April 4 but has been stopped on the city’s southern outskirts by forces allied to the GNA.

This has raised fears of a full-blown civil war in the oil-rich country, which has been mired in chaos since the NATO-backed toppling of long-time ruler Muammar Gaddafi in 2011.

Meanwhile, the World Health Organization (WHO) on Sunday said more than 30,000 people have been displaced due to ongoing fighting in and around the city.

The UN agency wrote on Twitter on Sunday that at least 227 people have been killed and more than 1,125 injured in the violence.

The fighting resulted in the temporary closure of Tripoli’s Mitiga airport, the city’s only functioning airport after the main airport was destroyed in 2014.

Analysts said a phone call between President Donald Trump and Haftar earlier this week, in which the US leader praised the commander’s “significant role in fighting terrorism”, was likely to have emboldened the LNA further.

The US and Russia declined on Thursday to support a UN Security Council resolution calling for a ceasefire in Libya. Moscow said it objected to the British-drafted resolution blaming Haftar for the latest flare-up in violence, and the US did not give a reason for its decision.

About 2,000 residents of Tripoli staged a protest in the city’s central Martyrs’ Square on Friday to condemn Haftar’s push on the city as well as world powers that back him, which they say include France, the United Arab Emirates, Egypt, Russia, and now the US. 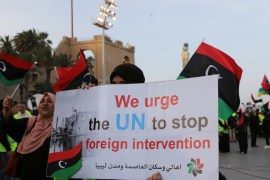 Heavy clashes near Libya’s Tripoli amid ‘new phase of attack’

Trump praises Haftar in apparent reversal of US policy on Libya