Khartoum, Sudan – More than 29 years after her son was executed by the Sudanese military, Hanim Hassan, a frail woman in her early 70s, started once again accepting condolences for his death.

“I feel much better accepting condolences with Bashir gone,” Hanim said, holding a rosary in her hand and going through the beads. “But I want him to be held accountable for what he has done. My son is a martyr, I want retribution for my son.”

Her son, Majdi Mahjoub, was 32 when he was accused of being a currency dealer by the Salvation Government, the name of the government that came to power six months earlier in a coup led by Omar al-Bashir. His mother said he was ambushed by a group of men when he returned home from playing tennis. The house was searched, and the men found a safe.

“His father used to put his documents in the safe there. When he died, he left all his money there, it was inheritance money for his children,” she said.

Hanim said they didn’t know he had been taken until they got a call from prison that they should bring clothes for him. After the call, Hanim wasted no time trying to get in touch with the top leaders of the new government. She said she was promised he wouldn’t be executed, but instead would be sentenced to 15 years in prison. The next day, she heard that he was hanged.

“I now want justice … and I want to clear my son’s name. He was not a currency dealer, they killed him unfairly. I want retribution for my son’s blood.”

Over the span of nearly 30 years, activists and rights groups recorded thousands of cases of Sudanese killed. Some were executed by the military, while others died in detention cells run by the feared National Intelligence and Security Services (NISS), or were killed by militias allied to the ruling party.

The list included political opponents, activists, dissidents and journalists. Some were killed immediately, while others including Ahmed Elkheir, a teacher in the eastern state of Kassala who was arrested after protests in February, died in custody.

Alkheir was detained along with several others, who told Al Jazeera he was tortured by a team of national security agents. Witnesses said he was sodomised with a hard object before he died.

“He lay on me after they knocked him down,” said Amjad Babiker, Ahmed’s friend who was arrested alongside him. “He continued to move sideways from pain and kept moaning. After a while, he went completely still. The security agent tried to wake him up and tapped him on his cheeks but I told him he’s dead.”

“He was in very good health when he left home. I uncovered his body and inspected his neck because it was swollen. I couldn’t tell if it was broken but marks of torture were visible all over him.”

Al-Bashir’s rule came to an end on April 11, after nearly four months of anti-government protests, when he was removed by the military. The following day, the coup leader said al-Bashir was under house arrest in a “safe place”.

On April 17, sources said the former president has been moved to a maximum security prison, although the military leadership has made no comment on his whereabouts. On the same day, the military council said two of the former leader’s brothers had been arrested.

But thousands of protesters at an ongoing sit-in at the army headquarters in Khartoum and other states want to see al-Bashir and his aides held to account for alleged crimes committed when in power.

Calls for justice grew louder during al-Bashir’s last weeks in power, as protesters chanted: “How much is a martyr’s blood worth?” and “Blood for blood, we won’t accept blood money.”

The demand has been echoed by the family of Akram Yousif, a pilot who was accused of being part of a 15-member team that attempted a coup against al-Bashir, less than a year after he came to power.

“We don’t know if he was taken to trial or not,” Yousif’s mother Nafisa Abubakr told Al Jazeera.

“We were told from some members of the revolutionary military council that they were not given justice. They were accused and arrested one day, and were executed the other. Now, I want to know where my son was buried. No one has told me, we want to give him a proper burial.”

Human Rights Watch (HRW) on Thursday urged the military leaders to uphold their commitments to human rights and justice.

“The dramatic developments in Sudan herald new openings to do right by victims of the violent crackdowns on protests and other crimes against civilians for the last three decades,” Jehanne Henry, associate Africa director at HRW, said in a statement.

“The transitional military council should act on its promises by handing al-Bashir and the others facing ICC arrest warrants over to the court at once and by investigating and prosecuting other abuses.”

While the military has replaced some figures in the judiciary system and vowed to review certain laws, analysts say achieving justice would be a long and complicated process.

“It takes time to establish the independent courts and judiciary because those demands of the protesters are freedom, peace and justice through sovereignty of the law,” Talal Ismail, a journalist and political analyst, told Al Jazeera.

“That would need time. It may not take very long but to hold all to account won’t be easy. There were many violations and we’re talking about a period that spanned 30 years.” 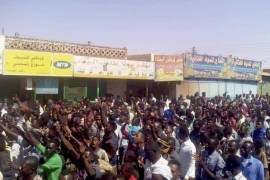 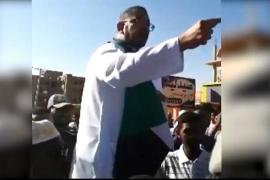 Government blamed for using armed men in civilian clothes to shoot demonstrators and doctors who were trying to help treat them. 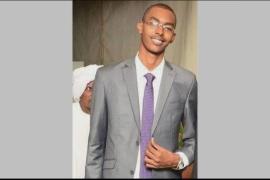 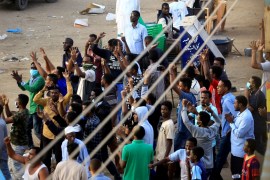 Doctor and child killed as protests break out across Sudan