Thousands of Sudanese are converging on the country’s military headquarters in Khartoum, continuing with their demands that the military council that took over power from former President Omar al-Bashir hand it over to civilian leadership.

Engineers and environmentalists took to the streets on Thursday, taking out marches at their respective ministries before proceeding onto the square in front of the military headquarters where a demonstration has been going on since last week as it continues to be the centre of the nationwide protests.

“We need to use the power of the people to take over these institutions and liberate them from the domination of the old regime,” Argam Ahmed, a representative of engineers in the umbrella group of unions and syndicates – the Sudanese Professional Association (SPA) – told Al Jazeera.

The SPA, which has been leading the protests, has told people not to leave the square until their demands are met.

“We are happy with what we have achieved so far, but we do trust the SPA. So when it says we should stay in the square, that’s what we are going to do,” said Amir Abdul Rahman, an engineer.

The renewed push by the demonstrators comes one week after al-Bashir was overthrown after three decades of rule.

Defence Minister General Ahmed Awad Ibn Auf stepped down after 24 hours as the head of the military council when the demonstrators objected to anyone associated with the previous regime.

The council is now headed by General Abdel Fattah al-Burhan, a career soldier who is largely unknown outside of the army.

Demonstrators have called on the military to hand over power to a civilian administration that will rule for four years.

The military council has made some concessions to protesters, including the removal of the country’s three highest-ranking public prosecutors, and the appointment of new intelligence chief. It has also invited protest organisers and political parties to decide on a civilian prime minister, but said it would hold on to the interior and defence ministries.

The thousands in the square on Thursday were expected to be joined by women’s groups, trade unionists, and students.

Despite hot weather, the mood in the square was jubilant on Thursday, with people singing and dancing, and others chanting slogans in support of the SPA as traders and businessmen distributed free food and water to the protesters.

Mohammed Amin in Khartoum contributed to this report. 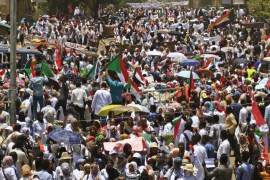 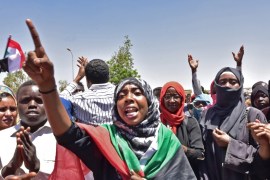 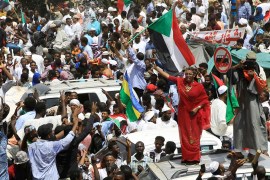 With Sudan facing a number of crises, finding a consensus has gained new urgency – but uncertainty remains.