The United Nations‘s top envoy for Libya has said that renegade General Khalifa Haftar tried to stage a coup when he issued an arrest warrant for Prime Minister Fayez al-Sarraj of the Tripoli-based Government of National Accord (GNA).

Speaking to BBC Radio on Monday, Special Representative Ghassan Salame said Haftar’s decision to issue in the course of his offensive arrest warrants against al-Sarraj and other top Tripoli officials “sounded more like a coup than counterterrorism”.

Haftar announced an attack against Tripoli on April 4 to wrest control of western Libya from armed groups that back the UN-backed GNA, headed by al-Sarraj.

The 75-year-old, who casts himself as a foe of “extremism” but is viewed by opponents as a new authoritarian leader in the mould of former strongman Muammar Gaddafi, has vowed to continue his offensive until Libya is “cleansed of terrorism”.

Libya, which has been mired in chaos since the NATO-backed toppling of Gaddafi in 2011, has been split into rival eastern and western administrations since 2014.

In March 2016, GNA chief al-Sarraj arrived in Tripoli to set up a new government, but the Haftar-allied administration in the eastern city of Tobruk refused to recognise its authority.

Haftar’s push on the capital threatens to further destabilise the oil-rich country and reignite a full-blown civil war.

At least 174 people have been killed and 756 wounded since the LNA started its offensive on April 4, according to the World Health Organization. It says it has deployed additional surgical staff to support hospitals receiving trauma cases.

About 15,700 people have been forced to flee their homes because of the conflict, according to the UN Office for the Coordination of Humanitarian Affairs (OCHA), with a “significant number” of others still stuck in conflict zones.

Haftar’s side confirmed the warrant had been issued and al-Sarraj’s government said it had been immediately rejected.

Diplomats believe Haftar, for now, faces no pressure to stand down from backers including the United Arab Emirates, Egypt and France, who see him as the best bet to end the factional chaos plaguing Libya since Gaddafi’s fall in the 2011 uprising.

“We are in fact in a military stalemate since eight days, or nine days,” Salame said, adding that both sides had carried out 30 air attacks each that had not changed the situation on the ground.

Qatar’s foreign minister said in a tweet on Tuesday that Haftar’s actions were obstructing international efforts towards dialogue in Libya.

Air raids and shelling have hit civilian infrastructure and residential homes, especially in the south of Tripoli where Haftar’s forces have sought to penetrate government defences. OCHA has said that targeting civilians was a violation of international humanitarian law.

The UN Support Mission in Libya (UNSMIL) warned in a statement that “the bombing of schools, hospitals, ambulances and civilian areas is strictly prohibited,” adding that it was documenting all such offences for the UN Security Council.

A school was hit on Saturday in an air raid blamed on Haftar’s forces, Tripoli officials said.

Salame, whose plans for a national reconciliation conference this week had to be postponed because of the fighting, said he hoped both sides would realise in the coming days that neither could achieve an outright military victory. 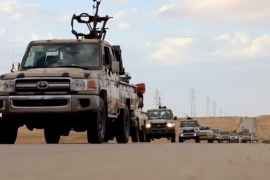 Are foreign powers worsening the conflict in Libya?

Eight years after the fall of longtime leader Muammar Gaddafi, Libya is once again at risk of an all-out war. 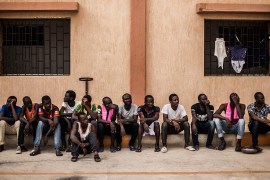 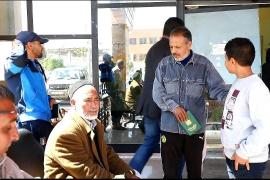 Thousands of Libyans made homeless as fighting in several locations in and around Tripoli intensifies.