It took nearly four months of vigorous street protests across Sudan to trigger an army takeover that ended Omar al-Bashir‘s 30-year authoritarian rule. But it took the same protesters a mere 24 hours to get al-Bashir’s replacement taken down.

The departure of Ibn Auf, a close aide of al-Bashir, set off a wave of celebrations in the capital, Khartoum, including among the thousands who had defied a military-imposed curfew to keep converging outside a complex housing the army headquarters.

“It fell again, it fell again,” chanted the protesters, who had denounced Ibn Auf’s announcement for the establishment of a two-year transitional military council as nothing but a “farce” that robbed them of their “revolution”.

On Saturday, in his first televised address to the nation, al-Burhan appeared to strike a more conciliatory tone.

The night-time curfew would be ended with immediate effect, he declared, vowing to “uproot the regime” and release the jailed protesters.

The new council chief, who is believed to be popular among the army rank-and-file and more removed politically from al-Bashir than Ibn Auf or other top senior security officials, also said that the transition to civilian-led rule could still last up two years – but called for dialogue with political parties and civil society groups.

The pledges were cautiously welcomed by protesters seeking credible reforms, including the rapid opening of political space and the inclusion of broadly supported civilian figures in the transitional administration.

“Al-Burhan said all the right things,” said Dallia Abdelmoneim, a protester in Khartoum. “After 30 years, it’s impossible to just hand over to a civilian government. This coalition between the two seems the safest and best option for us all. They’ll both keep each other in check.”

She added: “To get rid of the security apparatus in one go would be tantamount to madness.”

Indeed, talks got under way on Saturday, when the protest organisers presented a series of demands to the military leaders, including the formation of a four-year civilian government under the protection of the armed forces. On Sunday, the military council called for a consensus agreement to identify a “patriotic independent person to lead the government”, adding that they wanted to hold on to the interior and defence ministries to maintain security and order in the country.

Joseph Siegle, director of research at The Africa Center for Strategic Studies, said there was a “good chance” the protest and military leaders would reach an agreement.

“The military realises that they are facing enormous opposition if they try to hold onto power. This would make it very difficult for them to govern,” he said, arguing that al-Burhan’s goal appeared to be to uphold the cohesion and integrity of the military as an institution.

“Moreover, Sudan faces a severe economic crisis that will require technical expertise and support from international financial institutions. Neither of these will likely be forthcoming unless there is a civilian government with popular support,” he noted, citing al-Burhan’s promises might be a signal that he is willing to compromise.

But the protesters also need to compromise – specifically, they need to provide a face-saving option for the military to back a civilian-led transition.

“They [protesters] have proven, through the Sudanese Professional Association and associated groups, that they have the infrastructure to go the distance,” said Michael Woldemariam, assistant professor of international relations at Boston University, referring to the umbrella organisation at the forefront of the demonstrations.

“But sustaining their vigour and unity in the face of government concessions, and broader appeals to stabilise the country, won’t be easy,” he said.

For Georges Fahmi, a research fellow at the European University Institute, the main challenge for the protest movement is “to combine its ability [to mobilise] on the ground, with the ability to negotiate with the military council.

“This balance needs to be managed carefully,” he said.

Demonstrations were sparked in December last year by a government decision to remove wheat subsidies, which, in turn, led to a sharp increase in the price of bread.

Initially led by professionals such as lawyers, teachers and doctors who are angry at years of economic mismanagement, violent repression and institutional corruption, the protests quickly escalated into wider calls for political change, with women taking a leading role.

Siegle said the protesters have so far demonstrated a “remarkable” degree of organisation and discipline, as well as a plan of action – even as al-Bashir temporarily hit back by installing a state of emergency in late February.

“They [demonstrators] very much see themselves as continuing a democracy agenda from previous Sudanese generations, especially the protest movements of 1965 and 1984,” he said, referring to popular uprisings that toppled previous military dictatorships.

“The protesters represent a coalition of different groups, which means they are well-rooted with Sudanese society – this should enable them to sustain their effort.”

“With this in place, they will need to establish plans for the reforms of key institutions – justice, economic, media, legislative, electoral – that will create a level playing field for a genuinely democratic system.”

Such moves could be decisive for the country’s future. After leading a coup in 1989, al-Bashir spent years working to ensure he himself did not become prey to another coup. He created divergent security institutions as part of a tangled power-and-patronage network, which he expertly presided over for years.

But when al-Bashir finally did fall, having survived multiple challenges throughout his three-decade rule, the internal power struggle within Sudan’s security establishment – a multitude of militias and intelligence factions – became even more apparent.

On Saturday, state media reported that the powerful spy chief Salah Gosh had followed Ibn Auf in handing in his resignation.

“The security apparatus is highly fragmented, a byproduct of al-Bashir’s strategy of rule, and to some extent, the competing influences of Middle Eastern countries within Sudan’s security institutions,” Woldemariam said.

“The latter phenomenon has become more obvious in the last several years, as deep economic problems have made the country’s governing structures vulnerable to external penetration,” he added.

Sudan, which is part of the Saudi-UAE coalition fighting Houthi rebels in Yemen, has in recent years relied heavily on assistance from Gulf countries to shore up its ailing finances, which suffered a major blow in 2011 when South Sudan gained independence and took with it more than 75 percent of its oil production.

On Sunday, Saudi Arabia and the United Arab Emirates issued statements backing the military council, with Riyadh urging the Sudanese “to give priority to the national interest”.

Woldemariam warned, however, that external powers “will have to be careful” about “not wading into Sudanese politics too directly”.

“It will trigger a backlash from the Sudanese people, who are rightly demanding that they be the sole owners of their transition,” he said.

Siegle agreed, saying any foreign attempt to maintain a military government in Sudan would come at a high price.

“Sudan faces enormous economic challenges. While these external actors may be able to provide a short-term emergency package, none of them is in a position – if they were so inclined – to recoup Sudan’s $55bn in external debt, stabilise its currency, address widespread unemployment, and make Sudan an attractive investment environment,” he said.

“Yet, if they intervene, they will be held responsible for these challenges. Nor would they likely elicit much additional international support to help share this burden.”

With Sudan facing a number of crises, trying to find a way out of the current situation has gained new urgency – but even if a consensus was reached, the outcome could still be uncertain.

“Will the military follow through on its promises?” asked Woldemariam. “Will the settlement, over time, be inclusive enough to satisfy the diverse interests of the protest movement and civilian opposition, not to mention armed groups in the periphery of the country? Are there any credible guarantors to be had in this context that can build confidence between the different sides?” he continued.

“A lot of questions remain.” 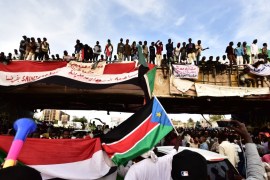 Military concedes to some demands from protesters, removes defence minister and vows to restructure intelligence agency. 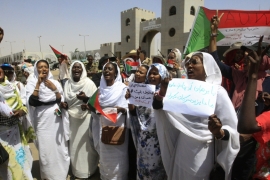