A bedraggled and sickly looking Assange on Thursday was dragged out of the building in the UK capital by officers and bundled into a police van after the South American country abruptly revoked his asylum earlier in the morning.

The Australian national, 47, was initially arrested for breaching bail terms and was later found guilty before a London court.

Assange skipped bail in 2012 to avoid extradition to Sweden over allegations of sexual assault.

The judge said Assange displayed the “behaviour of a narcissist who cannot get beyond his own selfish interest”. He faces one year in prison and will be sentenced at a later date.

Earlier on Thursday, police said they had been “invited into the embassy by the Ambassador, following the Ecuadorean government’s withdrawal of asylum”. Assange was arrested upon arrival at a police station on behalf of the US after it requested his extradition, police added.

US federal prosecutors meanwhile charged him with computer hacking and aiding whistle-blower Chelsea Manning, which they said carries a potential five-year prison term. His hearing will take place next month via video link.

Speaking to reporters outside the court, WikiLeaks editor Kristinn Hrafnsson said the case sets a dangerous precedent, and that Assange may face even more charges if he is delivered to the US.

“Anyone who wants to press to be free should consider the implications of this case. If they will extradite a journalist to the US, then no journalist will be safe”.

“There is no assurance that there won’t be additional charges when he is on US soil,” Hrafnsson added.

Assange was initially arrested for breaching bail terms in 2012 to avoid extradition to Sweden over allegations of sexual assault.

He has long claimed this was a pretext for his extradition to the US, where federal prosecutors investigating WikiLeaks have filed sealed charges against him.

Sweden dropped its investigation into Assange in 2017 but on Thursday the Swedish Prosecution Authority said it will review a request by the lawyer representing a woman who alleged she was raped by Assange to reopen a preliminary investigation into the allegation.

WikiLeaks predicted the expulsion was imminent several days ago. It also claimed to have discovered a spying operation against Assange within the embassy.

“Julian Assange is no hero,” British Foreign Secretary Jeremy Hunt said in a statement. “He has hidden from the truth for years and years and it is right that his future should be decided in the British judicial system.”

For her part, British Prime Minister Theresa May said in parliament that “this goes to show that, in the United Kingdom, no one is above the law”.

Around a dozen protesters gathered outside Westminster Magistrates Court to protest against the arrest, chanting slogans such as “US, UK, hands off Assange”.

“The British government is complicit in shutting down press freedom. This isn’t just about Julian Assange, this is about WikiLeaks, this is about Chelsea Manning. It’s the press, the publishers, the whistleblowers the essential freedom for all of those to expose corruption.”

Speaking to the BBC, Assange’s lawyer Geoffrey Robertson called the arrest a “breach of international law”.

“Ecuador will be blackballed from international society for doing this. You can’t give someone asylum for seven years and then hand them over, which is what Ecuador has done,” he said.

Robertson added that Assange faces up to 45 years in prison in the US, what he claims would be an effective death sentence for the activist, whose mental and physical health is understood to have deteriorated sharply during his long and cramped confinement in the embassy.

“They have no legal grounds for holding him that will stand up to international scrutiny. The UN did already in 2015 hold that the UK authorities had a duty to release him and grant him free movement. There have been serious flaws in the process against Mr Assange, both in Sweden and in the UK.”

There have been few figures more polarising in recent years than Assange, who has been celebrated for WikiLeaks’ work in publishing troves of classified diplomatic correspondence and revealing US war crimes in Iraq and Afghanistan.

However, critics paint him as undermining US state security, showing sympathy towards US President Donald Trump and his Russian counterpart Vladimir Putin, and of interfering in the US presidential elections in 2016 by leaking confidential emails from Hillary Clinton‘s campaign.

Tensions between Ecuador and its increasingly unwelcome guest had been growing under the country’s President Lenin Moreno, who published a video statement call criticising Assange’s “discourteous and aggressive behaviour”.

Moreno, who was elected in 2017, previously claimed Assange was interfering with other countries’ affairs by continuing to work with WikiLeaks.

He said his asylum case had been withdrawn “after his repeated violations to international conventions and daily-life protocols”.

Swedish prosecutors dropped the sexual assault investigation in 2017 when it became apparent his extradition would not happen “within a reasonable timeframe” but his accuser’s lawyer on Thursday requested that the state re-open the case.

“This is news to us too, so we have not been able to take a position on the information that is now available. We also do not know why he is under arrest. We are following the developments,” said Sweden’s chief prosecutor Ingrid Isgren shortly after the arrest.

The statute of limitations for rape in Sweden is 10 years, which would not come into force in Assange’s case until August 2020.

“The decision of the Ecuadorean government to hand over Assange to the UK police is a clear violation of his Ecuadorean citizenship and asylum rights,” said British human rights activist Peter Tatchell.

“The British government should refuse to do the bidding of the Trump administration. It should give public assurances that Assange will not be handed over the US authorities,” said Tatchell. 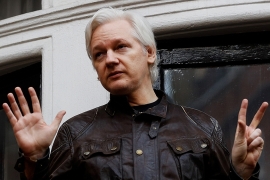 Assange charged with conspiracy in trying to access a classified US government computer with Chelsea Manning in 2010. 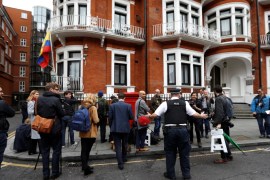 WikiLeaks founder Assange ‘to be expelled’ from Ecuador embassy

A WikiLeaks Tweet quotes a high-level source saying Assange will be kicked out of the embassy he has been in since 2012.