London, United Kingdom – Brexit is going through yet another crunch week. It is unlikely to be the last as the European Union appears likely to grant the United Kingdom another extension at an emergency European Council summit on Wednesday evening.

The heads of the 28 EU member states, including the UK, are meeting in Brussels on Wednesday evening to discuss a request by British Prime Minister Theresa May for an extension until June 30.

But a longer extension with a clause to end the UK’s membership earlier if a deal is passed – a so-called “flextension” – emerged as a more likely outcome on Tuesday.

The UK was originally scheduled to leave the EU on March 29, but the last European Council meeting ended with a decision to give the UK a two-tier deadline of May 22 should the withdrawal agreement be passed in the House of Commons, or April 12 if not.

By this date, only two days from now, May was to present the Council with a solution to the Brexit conundrum.

And while the British parliament has failed to reach an agreement on other Brexit options, talks between May’s Conservative party and the opposition Labour party have so far not produced results.

A day before the summit, May flew to Berlin and Paris in an attempt to secure support for her request from the EU’s two most influential leaders, German Chancellor Angela Merkel and French president Emmanuel Macron.

The latter has been vocal about his concern in granting the UK another extension without clear evidence that May has a new Brexit strategy.

While Merkel has remained open to a long delay to avoid a damaging “no-deal” Brexit, Germany’s EU affairs minister talked about “very strict conditions” for any extension of Article 50, the part of the EU treaty that sets out the rules to leave.

European Council President Donald Tusk, on the other hand, suggested offering the UK a flexible extension.

In a letter to European Council members on Tuesday, Tusk urged leaders to consider an extension for “as long as necessary and no longer than one year.”

“Our experience so far, as well as the deep divisions within the House of Commons, give us little reason to believe that the ratification process can be completed by the end of June,” Tusk argued in the letter. He added that this would avoid repeated short extensions and emergency summits while giving the UK time to leave “whenever it is ready”.

With European Parliament elections due on May 23-26, EU leaders have been adamant that should the UK still be a member of the EU by then, it would have to hold elections because its non-participation could threaten the functioning of the EU from a legal perspective – despite expert opinion remaining divided on this issue.

The UK’s Electoral Commission began preparations for the poll this week. The elections would be cancelled if a deal is passed before May 23.

According to a “draft conclusions” document circulated by Brussels correspondents late on Tuesday, the European Council could agree to an extension lasting “only as long as necessary”, while the UK would have to leave on June 1 if it failed to hold elections.

Hardline Brexiteers have vowed they would make life difficult for the EU if they were to be part of the next parliament.

The chair of the European Research Group (ERG) of Eurosceptic MPs tweeted this week that: “If a long extension leaves us stuck in the EU we should be as difficult as possible. We could veto any increase in the budget, obstruct the putative EU army and block Mr Macron’s integrationist schemes.”

After MPs rejected the deal the British prime minister negotiated with the EU for the third time on March 29 – the original “Brexit day” – the prime minister turned to opposition leader Jeremy Corbyn to find a way out of the impasse.

Labour has been pushing for a closer relationship with the EU after Britain’s exit from the block, including a customs union.

But talks failed to lead to an agreement before Wednesday summit, with talks due to continue on Thursday.

So far, Labour has been less than enthusiastic about the negotiations, accusing May of being unwilling to compromise.

Should the idea of a cross-party agreement fall through, May has committed to putting a series of Brexit options to a vote in the House of Commons, and to being bound by the results.

Two rounds of “indicative votes” to find alternatives to May’s deal have so far ended with MPs voting down all options.

These could include holding a second referendum on any deal agreed by parliament.

While both sides have committed to avoiding a no-deal Brexit and the British parliament passed a law to force an extension request and prevent the UK from crashing out of the EU, April 12 remains the default option under Article 50.

The International Monetary Fund (IMF) warned on Tuesday that a no-deal Brexit could push the UK’s economy into a two-year recession and that the country would be hit harder than the rest of the EU.

The National Institute for Economic and Social Research (NIESR) said earlier this year that while the UK’s economy would be negatively affected in the long-term, an immediate no-deal recession could be avoided if contingency measures were in place.

“Based on our estimates, if there is a strong reaction of policy the likelihood of a recession would be mitigated and reduced,” Arno Hantzsche, a senior economist at NIESR, told Al Jazeera.

However, he added that “contingency measures would only have a limited impact and that is because some of the things associated with a no-deal Brexit, like queues at the border, and the higher bureaucratic cost of moving goods and services across the border, will be there and will be significant.”

The Institute for Government in London and fact-checking organisation Full Fact said on Tuesday that according to evidence they have examined, “the government has not yet met its own goals for no deal preparedness in a number of areas.”

In other areas, analysts warned, there simply isn’t enough published evidence to assert the government is ready for the worst-case scenario. 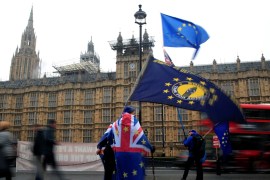 The UK parliament has approved Prime Minister Theresa May’s plan to request an extension to delay Brexit until June 30. 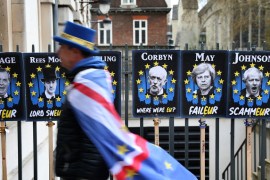 What is a no-deal Brexit and how would it affect the UK?

Crashing out of the EU would affect UK politics, the economy, security and millions of British and European migrants.