Islamabad, Pakistan – Pakistani authorities say they have detained 44 members of various armed groups, including relatives of Jaish-e-Muhammad (JeM) chief Masood Azhar, the man at the centre of an ongoing crisis with neighbouring India.

Speaking to reporters on Tuesday in Islamabad, Interior Secretary Azam Suleman Khan said those arrested would be held for at least 14 days, and if further evidence was found against them they would be prosecuted.

Both names were among several suspects whose details were included by India in a recent dossier shared with Pakistan following an attack last month in Indian-administered Kashmir that killed 42 Indian security forces personnel and prompted a tense standoff between the two nuclear-armed neighbours.

India blamed Pakistan for “controlling” the attack, and went on to carry out air raids on Pakistani territory. Pakistan retaliated by launching air raids of its own, shooting down an Indian fighter jet in the process.

The pilot of the jet was returned on Saturday, but tensions remain high – on Tuesday, Pakistan’s navy said it successfully foiled an attempt by an Indian submarine to enter Pakistani waters.

In Tuesday’s press conference, Khan alleged that the Indian dossier, shared with Pakistan on Thursday, was short on prosecutable evidence.

“There are some things that were mentioned in the Indian dossier, but they did not provide evidence,” he said. “Until they provide us evidence, we have taken some people into protective custody and we will investigate it.”

He asserted that Tuesday’s operation was aimed against all armed groups operating on Pakistani soil, an allusion that authorities were not just targeting JeM, which claimed responsibility for the Pulwama attack.

In recent days, the United States, Britain and the European Union have issued statements calling on Pakistan to deal with armed groups, but Shahryar Afridi, minister of state for interior, asserted that Islamabad was not under foreign pressure to make the arrests.

“This is Pakistan’s decision,” he said, sitting alongside Khan. “This is our own future and our own initiative. We are not doing this under pressure.”

There was no immediate reaction by the Indian government to the arrests.

The move came a day after Pakistan’s government passed a bureaucratic regulation authorising the seizure of assets of armed groups that have been sanctioned by the United Nations, including JeM.

The measure does not have the same constitutional authority as a law passed by Parliament, and its enforcement may be challenged in court. In the past, listed individuals in Pakistan have successfully challenged such regulations in this way.

“The objective of the UNSC (Freezing and Seizure) Order 2019 is to streamline the procedure for implementation of Security Council Sanctions against designated individuals and entities,” Pakistan’s foreign ministry said in a statement on Monday.

The new measure, which updated existing legislation, applies to all groups designated by the UN as being affiliated with ISIL and al-Qaeda and are also listed under domestic Pakistani antiterrorism laws. Pakistan outlawed JeM as a “terrorist organisation” in 2002.

The UN says JeM has coordinated with the Afghan Taliban to target members of the US-led NATO military coalition in neighbouring Afghanistan, as well as with al-Qaeda.

Azhar, the JeM chief, is not subject to UN sanctions, but appears on a Pakistani government list of “proscribed individuals”.

Other armed groups would also be subject to the new measure, including Lashkar-e-Taiba and its charitable arms Jamaat-ud-Dawa and Filah-e-Insaniyat Foundation.

The latest government move comes as Pakistan has come under increasing pressure from the Financtial Action Task Force (FATF), a 38-member intergovernmental body that monitors and combats the financing of armed groups and money laundering.

Last year, FATF downgraded Pakistan to its “grey list”, saying the country needed to take urgent measures to tackle armed group funding, or face being blacklisted – such a development would put barriers between Pakistan’s financial system and the international banking infrastructure, among other implications.

Monday’s statement by Pakistan explicitly acknowledged that the new regulation had “been formulated in line with UNSC [United Nations Security Council] and FATF standards”.

The measure also formalises the methodology for seizing assets, including funds, moveable assets, bank deposits and property. It allows for those subject to the assets freeze to apply for exemptions based on “basic” living needs, in line with UN regulations.

UN sanctions require designated individuals and groups to be subject to an assets freeze, international travel ban and an arms embargo.

Pakistan has passed similar regulations in the past, with listed individuals often finding relief through the court system, challenging the freeze on the grounds it violated their fundamental rights.

Analysts say that for the new measure to have a real effect, it will have to be passed by Parliament, effectively amending the constitution to allow assets of Pakistani citizens to be seized based on international sanctions, even if they have not been convicted in Pakistan’s courts.

“They pass these regulations whenever they want to show action,” said Amir Rana, director at the Islamabad-based Pakistan Institute of Peace Studies (PIPS).

“They will have the same status as before, as long as we do not have the proper legislation on these issues. They will get relief from the court.” 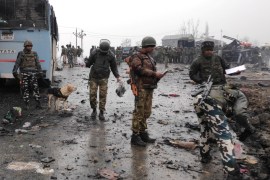 New regulation formalises process for seizure of assets of any armed group or individual, including Jaish-e-Muhammad.