Algiers, Algeria – Thousands of university students have marched in Algeria‘s capital, as peaceful rallies against President Abdelaziz Bouteflika’s bid to seek a fifth term continued for a second week.

Like their peers who held similar protests across the North African country, the students in Algiers on Tuesday took to the streets to reject the 82-year-old’s candidacy in the April 18 elections.

“Nobody wants a fifth term for Bouteflika. This is ridiculous, they are treating us with contempt!”, 19-year-old Hamza, a science and technology student who, like many others, has known no other president, told Al Jazeera.

Bouteflika, who took office in 1999, suffered a debilitating stroke that confined him to a wheelchair in 2013.

On Tuesday, the young protesters chanted slogans against the ailing leader and his brother Said, a presidential adviser seen by many as having major political influence.

They also denounced widespread corruption and government inefficiency, echoing those taking part in mass nationwide protests on February 22 and March 1, while also insisting on “silmiya” (peaceful) – a key theme of the rallies so far.

Alongside the flags and political banners, there were plenty of tongue-in-cheek signs on display during the students’ rally, as well as a smattering of pop-culture references.

“Algeria has no master. Algeria is a free country,” read one banner, in reference to a line said by a character in the popular Harry Potter series. “Accio loyal government,” said a different sign, imitating one of the fictional young wizard’s spells.

😭😂😂 Students downtown #Algiers went full #HarryPotter during their anti- #Bouteflika protests. A poli science student told me: "You know, it's like in Harry Potter when Donny the slave gets his freedom."
They are brave, beautiful and hilarious.#YouthPower#AlgeriaProtests pic.twitter.com/i0qbnlNzeM

Another student wrote, “Where is democracy? I don’t see it”, a meme inspired by Dora the Explorer. A different student brought a completely off-topic sign: “Subscribe to PewDiePie,” the popular YouTube channel.

Humour is also how many Algerians have been dealing with the president’s absence since the protests erupted last month. A campaign launched on Facebook encouraged subscribers to start calling the university hospital in Geneva, Switzerland, where Bouteflika is believed to have been since February 24 for “routine medical checks”, according to officials.

The hospital has reportedly received hundreds of phone calls from Algeria. “Please tell Mr Bouteflika that the Algerian people are worried about him,” an Algerian can be heard saying in the recording of one such call posted on YouTube, as an increasingly frustrated operator tries to stick to the script of not revealing patients’ identities.

On Sunday, Abdelghani Zaalane, Bouteflika’s campaign manager, formalised the president’s candidacy by filing paperwork on his behalf, a move seen by legal experts as illegal because candidates are required by Algerian law to register themselves.

Zaalane also read a letter attributed to Bouteflika meant to calm the protests, in which he offered not to serve a full term if he won next month’s vote.

According to the statement, Bouteflika’s first reaction to the demonstrations was to vow to organise a national conference that would set a date for new elections that he would not contest.

Still, the proposals failed to appease public anger. Disappointed with Bouteflika’s move to maintain his candidacy despite the protests, many took to the streets on the same night, followed by thousands more the following day.

At the students’ protest on Tuesday, the snap election proposal was mocked and criticised. “He wants to stay another year? We’re not renting apartments here,” one sign said.

“The regime is just trying to stall in order to replace Bouteflika with someone who suits them. We want them all gone,” 22-year-old Amine, a finance student, told Al Jazeera.

The number of people joining the protests has seemingly made it impossible for police to enforce a protest ban put in place in Algiers in 2001.

New protests are planned for March 8, in what is becoming a new ritual in Algeria. 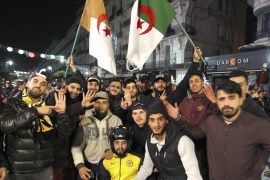 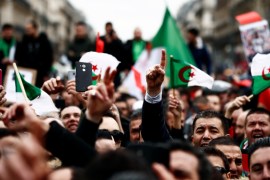