By Asad Hashim and Rifat Fareed

Islamabad/Srinagar – Kashmiris have been demanding a solution to the unresolved dispute over whether the territory should be independent, or a part of India or Pakistan since the subcontinent gained independence from the British in 1947.

In 1988, after years of tightening space for political dissent in the Indian-administered portion of Kashmir, protests broke out after a disputed state election months earlier. At the centre of the tensions was the Jammu and Kashmir Liberation Front (JKLF), a pro-independence group that wanted Kashmir to be separate from both India and Pakistan.

More groups soon joined the fray, with the Hizb-ul-Mujahideen taking a leading role in protests and attacks on Indian security forces. The JKLF renounced violence in 1994.

In the years to follow, several other armed groups would emerge – some drawing their support from within Indian-administered Kashmir, while others based themselves in Pakistan.

Here are the major groups that are involved in the armed movement for Kashmiri self-determination.

Hizb-ul-Mujahideen (HuM, also commonly referred to as Hizb) also emerged from the 1988 protests and has become the largest indigenous rebel group based in Indian-administered Kashmir.

The group was founded by separatist leader Muhammad Ahsan Dar in September 1989, espousing a pro-Pakistani ideology that called for India to leave the territory so that it could accede to Pakistan. Hizb also took an overtly religious stance, as compared with the relatively secular JKLF which it grew to replace at the forefront of the armed movement.

Hizb has carried out dozens of attacks on Indian security forces, from guerrilla warfare-style raids on personnel and convoys to full-fledged suicide attacks.

In 2016, the killing of HuM commander Burhan Wani by Indian security forces led to widespread protests across Kashmir, with tens of thousands attending his funeral in the town of Tral. The killing sparked massive protests across the territory, culminating in an Indian security forces crackdown that continues until present, involving extrajudicial killings, detentions and the maiming of protesters with pellet guns.

“Wani shunned the veil of anonymity when he and his associates posed for pictures with unmasked faces, flaunting guns,” said a senior police official in the region. “This bravado attracted many young boys towards armed insurgency making it indigenous again.”

The new generation of HuM fighters changed the face of the rebellion in Indian-administered Kashmir, with the movement taking on a more homegrown quality. Some of the new fighters are highly educated and say they are taking up arms because they feel they are left with no choice in the face of Indian security forces actions in Kashmir.

“I chose a gun over the pen to reply back in the same language,” wrote Manan Wani, a young PhD scholar who joined the group.

Currently, Hizb has a huge network of fighters in southern Kashmir’s Shopian, Kulgam and Pulwama districts.

“South Kashmir is turning out to be the new stronghold of rebels in the State,” said a police officer. “The fact that most of the rebels in south Kashmir are locals makes the militancy more dangerous here. The killing of every local militant breeds two more. Funerals of rebels have also become an issue, as thousands of people take part in them.”

HuM is led by Mohammed Yusuf Shah, also known as Syed Salahuddin, who is based in Pakistan.

Formed in 2000, Jaish-e-Muhammad (JeM) has claimed responsibility for some of the most high-profile attacks in Kashmir and on targets elsewhere in India in recent times. The group – whose leadership is based in Pakistan and which runs a network of seminaries there – has also been at the centre of Indian allegations that its neighbour is “sponsoring” attacks on Indian soil.

The group was founded by Masood Azhar, a former member of the Harkat-ul-Mujahideen group and a US-designated “terrorist”. Azhar also allegedly has links to al-Qaeda and his group is implicated in sending fighters to Afghanistan to battle US-led NATO coalition forces.

JeM has carried out several high-profile suicide and other attacks against Indian targets since its formation, including a 2001 attack on the Indian parliament in New Delhi and on the legislative assembly in Indian-administered Kashmir.

It has also been linked to the 2016 Uri attack, which killed at least 23 people at an Indian security forces camp in Indian-administered Kashmir, and the Pathankot attack earlier that year, killing at least eight people in a raid on an Indian air force base.

In 2019, JeM claimed responsibility for the Pulwama attack, which saw a suicide bomber drive his vehicle into an Indian security forces convoy, killing at least 42 people. It was the deadliest attack on Kashmiri soil for decades.

Following that attack, Pakistan’s government announced that it had taken over a large JeM seminary complex in the central city of Bahawalpur. Days later, Pakistan’s foreign minister said that JeM chief Masood Azhar was “in the country”, but offered no further details.

Indian security forces say there are 56 JeM fighters active in Kashmir, with 33 foreigners and 23 locals. The bomber who drove his vehicle into the security convoy at Pulwama was one of JeM’s local cadre, 20-year-old Adil Dar.

It was the first time a large-scale suicide attack had been carried out by a local, police say.

“It also is worrying that local boys are being recruited for such attacks,” the police official told Al Jazeera.

The Indian government says it is intensifying its battle against JeM.

“We are intensifying drive against all the militant outfits, particularly Jaish. Our main focus is on foreign militants. We also will deal with people who give shelter to them,” said a senior Indian-administered Kashmir government official.

Founded in 1990 by Hafiz Muhammad Saeed, Lashkar-e-Taiba (LeT) has been one of the most prominent armed groups operating on Pakistani soil and allegedly sending fighters across the Line of Control into Indian-administered Kashmir. According to Indian security forces data, the group has the largest presence of fighters in Indian-administered Kashmir, with 129 active fighters.

The group carried out a series of attacks against Indian security forces when the Kashmiri armed movement began to escalate in the 1990s.

In 2008, India blamed LeT for the Mumbai attacks, which killed more than 160 people when gunmen stormed hotels and a railway terminus. India named Saeed as the “mastermind” of the attack, prompting the United States to place a $10 million bounty on his head. He and his group are also listed by the UN.

Pakistan says it has taken steps to clamp down on LeT, but charitable wings of the group – Jamaat-ud-Dawa (JuD) and Filah-e-Insaniyat Foundation (FIF) – continue to operate freely across the country. Saeed denies any link to LeT, but is the chief of JuD. Hafiz Abdur Rauf, the chief of FIF, is also a wanted man for his alleged work with LeT.

Following the Pulwama attack on February 14, Pakistan reimposed a ban on JuD and FIF that had lapsed.

The group has also been attempting to enter mainstream politics, launching a political party by the name of Milli Muslim League (MML). The party was not allowed to register for the 2018 polls, but its candidates ran as independents across the country. They did not win any seats.

“Lashkar-e-Taiba has a strong presence in the northern part of Kashmir. They are mostly foreign militants who have infiltrated into Kashmir from Pakistan,” said the Indian police officer. 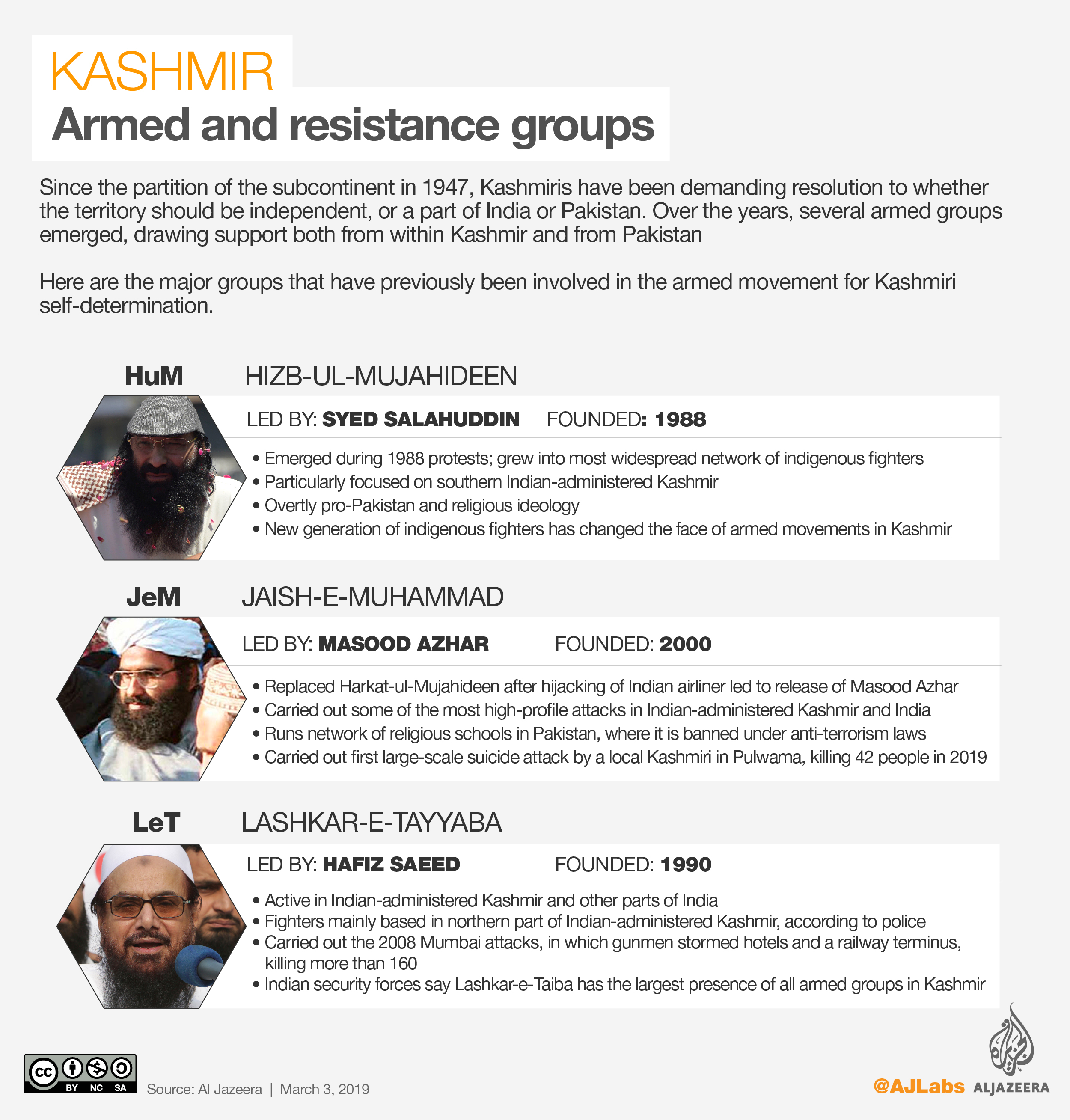