The death toll from a horrific blaze that ripped through a Dhaka high-rise building has climbed to 25, Bangladeshi police said, as government officials vowed tough action to improve lax safety standards.

Speaking to reporters on Friday, Mostaq Ahmed, deputy commissioner of the Gulshan division of Dhaka Metropolitan Police, said the victims had been identified and “24 have been handed over to their families”.

The blaze on Thursday left hundreds of people trapped inside the 22-storey FR tower screaming for help as horrified onlookers massed outside.

Some of those stuck inside made it to safety by sliding down cables on the side of the building, but others took their chances and jumped in a bid to escape the smoke and heat. Six people leaped to their deaths.

More than 70 people were taken to hospital for treatment in the wake of the fire.

On Friday, firefighters completed the process of combing through the gutted and blackened floors of the building. Ahmed, of Dhaka Metropolitan Police, said there was no immediate indication if others are missing.

“Still we are checking, if someone comes to us we will verify,” he said.

Ataur Rahman, a restaurant worker who rushed to the scene when the fire broke out, said the image of people jumping from the building would haunt him forever.

“I could hear the screams of people trapped inside the building,” he told Al Jazeera. “Soon after the fire spread on the seventh, eighth and ninth floors, people started breaking window panes to get out.

“Then I witnessed the most horrible scene – people falling from the top floors while trying to climb down the wires in the building. I saw two people falling down.”

Abdulla Al Faruq Tomal, a 32-year-old who worked on the 11th floor of the FR Tower, was among the 25 victims.

His wife, Sanjidha Ovi, said Tomal called her soon after the fire broke out.

“He telephoned me and said he had found a safe zone inside the building. The last time he called, he said he was on the 15th floor and that the smoke from the fire had reached that floor. I told him to go to the roof, but he said there was ‘no scope’ to do so,” Ovi told Al Jazeera.

“We have two children. I don’t know what will happen to them,” she said, choking up.

“I received my brother’s dead body on Friday at the morgue,” Akhter told Al Jazeera. “He was supposed to get married in this year.”

Authorities have launched an investigation into the cause of Thursday’s fire.

Rezaul Karim, minister of public works and housing, said a murder case will be filed against those responsible for the tragedy.

“Definitely, this is murder. It is not an accident,” he told reporters. “Legal action will be taken against those responsible for violating the building code, no matter how powerful they are.”

Enamur Rahman, minister for disaster management and relief, told Al Jazeera there was little fire-fighting equipment inside the building.

“Had there been a proper fire extinguishing system, and fire drills to train inhabitants inside the buildings, then those deaths could have been averted,” he said.

Shakil Newaj, fire department director, told the AFP news agency that “there were no sprinklers” while “fire exits existed only in name”.

At just 0.6 metres and 1.2 metres wide, the building’s two exits were too narrow for people inside to leave smoothly, and were blocked by obstructions that made the task harder, according to another fire department official.

“If the building had proper fire exits, people would have been able to come out,” Julfikar Rahman told Reuters.

The Dhaka development authority said it was investigating how the owner, who had permission only to build 18 stories, managed to extend them to 22.

Critics have blamed lax regulations and poor enforcement for the deadly blazes.

“We have long been telling different civic authorities that most of the high-rises in Dhaka are constructed in violation of the existing rules. But before a tragic accident like this happens, no one pay heed to our concern,” Mehedi Ahmed Ansari, director of the Bangladesh Network Office for Urban Safety at the Bangladesh University, told Al Jazeera.

The latest inferno erupted barely a month after at least 70 people were killed in Dhaka apartment buildings where chemicals that were being stored illegally exploded – unleashing a blaze that took more than 12 hours to control.

Faisal Mahmud in Dhaka contributed to this report 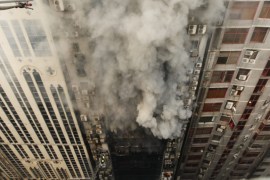 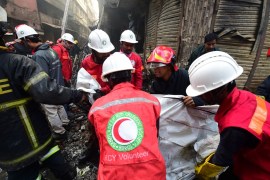 Fires and building collapses are frequent in the country, particularly in the massive garment industry. 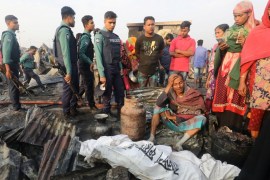