Kharkiv, Ukraine – There has long been a sense of separation in Ukraine, with the east closer to Russia and the west having more affinity with Europe.

In Kharkiv, that split deepened five years ago.

As Kiev celebrated the overthrow of the country’s pro-Russian President Viktor Yanukovich in 2014, a large portion of people in Kharkiv – just 30km from the Russian border – felt threatened.

Pro-European demonstrations born in 2013 on Kiev’s Independence Square – known as the Maidan protests – were copied in the country’s second-largest city, but the crowds were never more than about 300 people.

In contrast, a sprawling pro-Russian protest camp occupied the central square in 2014 with Russian flags on display.

“Many Kharkiv residents took it [the removal of Yanukovich] as a coup because more than 60 percent of the population [of Kharkiv] traditionally supported his Party of Regions,” said Andrii Borodovka, journalist and Kharkiv resident who took part in anti-Maidan protests in the city in 2014.

“When there was a change of government in Kiev, many people [in Kharkiv] saw it as a threat. There were fears that restrictions would be introduced, the Russian language would be banned and fascism would start,” he told Al Jazeera.

In 2016, Borodovka, who wrote critical articles about the Maidan protests, was arrested for undermining the territorial unity of Ukraine. He was given a three-year prison sentence, with two years of it suspended.

The pro-Russian sentiments that led people like Borodovka to take to the streets also helped prompt the annexation of Ukraine’s Crimean Peninsula by Russia and the seizure of large parts of the eastern regions of Donetsk and Luhansk by Moscow-backed separatists in March 2014.

Ivanna Skyba-Yakubova, a Maidan supporter and cofounder of the Help Army volunteer group that provided material assistance to the Ukrainian soldiers when the war broke out in the east, told Al Jazeera that Moscow had a plan to for Kharkiv’s secession, as well.

“There was a plan to create four ‘People’s Republics’ in Donetsk, Luhansk, Odessa and Kharkiv. In two regions, it worked out, and in the other two failed,” she said. “In some places, the security services played a role to prevent that from happening, in others, civil activists [did] or the context was different.”

The worst-case scenario was avoided in Kharkiv, but the scar remained, according to Skyba-Yakubova.

She said as she watched Maidan supporters and their detractors clashing in Kharkiv, “I had a feeling that my city was being taken away from me. There was a crack in the society. There was a colossal level of mistrust,” she said.

“Even well-dressed local women were kicking 17-year-old kids, spitting in their faces and verbally abusing them. Even three years later, I would see a woman in the underground train and think maybe you were the one kicking kids.”

The differences that led to the split in the society in many parts of Ukraine do not seem to have been addressed.

Many Ukrainians, especially those living closer to the Russian border, feel that the government in Kiev does not understand how the conflict with Moscow hurts its population, for the sake of forging closer ties with the European Union and NATO.

Elena Olenchenko, a pensioner who took part in anti-Maidan protests in 2014, told Al Jazeera: “I don’t think our government has our interests at heart. If they did care about us, they would have listened to us and there would have been no war in the Donbass.”

Donbass is the Ukranian area that includes Donetsk and Luhansk.

Olenchenko considers Ukraine’s current government illegal which has her considering staying away from the polls in the upcoming presidential election.

In contrast, Serhii Maliutin, 21, an internally displaced person who fled Yenakiieve, a city in rebel-held Luhansk region in late 2014, plans to cast his first-ever ballot for the candidate who will pay attention to the needs of the young people.

“The new generation needs support from the new president. Nowadays, a growing number of students go abroad to study and then they never come back,” he told Al Jazeera.

Maliutin is a student of international relations at Kharkiv’s Karazin University, where he said a degree is no guarantee of a job.

“Students don’t have a motivation to stay in Ukraine. When you graduate from a university, you need to find work which is scarce here. Also, our education is built in a way that it is hard to realise your potential. There is a lack of practical education and an abundance of theory which sometimes lags behind by 10 years.”

According to the American Chamber of Commerce in Ukraine, approximately five million Ukrainians, about 25 percent of the country’s economically active population, work abroad.

But the biggest problem on voters’ minds is the country’s crippling corruption.

President Petro Poroshenko and his post-Maidan government did not do enough to crack down on the system that allowed corruption to flourish.

The National Anti-Corruption Bureau of Ukraine (NABU) was set up without the establishment of an anti-corruption court that would allow it to follow through with its investigations.

Subsequently, the money stolen from the state coffers during Yanukovich’s government has not been recuperated. And corrupt officials from his era have not been tried.

“No revolution brings healthy changes very fast. We did not expect that in the very first year or so we would live wonderfully,” said Skyba-Yakubova.

“But there was a huge disappointment with the fact that key things that we were fighting for did not change. All those shady deals between the government and business world, and the criminal business [remain a norm].”

Ukraine’s presidential election is scheduled for March 31 with a record number of candidates vying to become the war-torn country’s sixth president.

According to opinion polls, Poroshenko is trailing in the third spot behind opposition leader Yulia Tymoshenko and the frontrunner, comedian Volodymyr Zelensky. 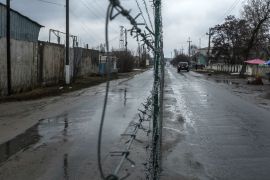 Milove village is a good visualisation of Ukraine’s current situation – torn into two pieces by the weight of its past. 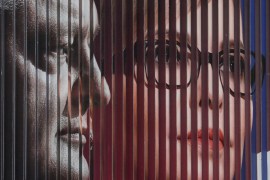 Ukraine presidential election: All you need to know

Ukraine to choose its sixth president from a record number of candidates. 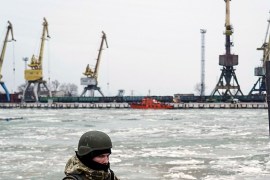 US, Canada, EU hit Russia with fresh sanctions over Ukraine

Measures target Russian officials over Moscow’s actions against Ukraine, including 2018 naval clash in the Kerch Strait.