Hundreds of thousands of Algerians have marched through the streets of the capital and other major cities for a sixth straight Friday to demand the immediate departure of President Abdelaziz Bouteflika and the ruling elite.

The latest rallies came days after Lieutenant General Ahmed Gaid Salah, the powerful army chief, called for the application of a provision in the Algerian constitution that could remove the president on account of his failing health.

Under Article 102, the Constitutional Council could decide that a sitting head of state is no longer capable of fully exercising their functions and ask Parliament that they be declared unfit to rule.

But opposition figures and protesters rejected Salah’s move, saying it came too late and describing it as another attempt by the ruling class to maintain the status quo.

“I march today against the enforcement of Article 102,” Massinissa, a 36-year-old filmmaker protesting in Algiers on Friday, told Al Jazeera.

“Yes, I want to see Bouteflika out but I also want the old guard that has ruled Algeria since 1962 to leave,” Massinissa added, referring to the year the North African country declared independence.

Aged 82, Bouteflika has made just a handful of public appearances since suffering a debilitating stroke in 2013, which has confined him to a wheelchair and damaged his ability to speak.

Despite his ailing health, Bouteflika continued enjoying the support of Algeria’s powerbrokers, including the military, and went ahead to win presidential elections in 2014.

His supporters credit him for his role in Algeria‘s independence struggle against colonial France, as well as ending a destructive civil war that claimed the lives of an estimated 200,000 Algerians throughout the 1990s.

His critics, however, argue he has overstayed his welcome.

“We have been dealing with a presidential vacuum for nearly seven years,” said Karim Mesbah, a 48-year-old shopkeeper. “It is too late to enforce Article 102 of the Constitution.”

Authorities have struggled to deal with the current wave of protests, the biggest in Algeria for decades.

Amid mounting public anger, Bouteflika first gave in to protesters’ demands while in Switzerland on medical leave on March 2, saying he would step down within a year if reelected in the April polls.

His move, however, failed to appease demonstrators who continued taking to the streets.

On March 11, Bouteflika said he would not seek reelection but also cancelled the much-awaited polls, vowing to hand over power to a successor “chosen by the people” after a new constitution is approved and a national conference is held.

In response, opposition parties and protesters accused Bouteflika of attempting to illegally extend his fourth term in office, set to expire on April 28.

“A transition can take six months, a year or two. Regardless of how long it lasts, I will be here, in the streets, fighting for people’s rights,” Lynda, a retiree in Algiers said, adding that protesters would continue taking to the streets until “real change” took place.

“We want to put an end to this military regime and a civilian government that enshrines human rights in the constitution.”

Djamila Ould Khettab contributed to this report from Algiers 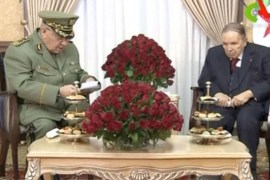 Opposition leaders say general’s call for Bouteflika to be declared unfit to rule is a manoeuvre to preserve old guard. 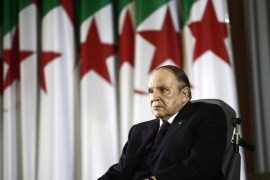 Ahmed Gaid Salah calls for a constitutional procedure that would see the president’s removal on health grounds.