Christchurch, New Zealand – New Zealand has banned the sale of assault rifles and semi-automatic weapons after the country’s worst-ever attack that killed 50 Muslims in two mosques.

“Be assured this is just the beginning of the work we’ll be doing,” Prime Minister Jacinda Ardern told a news conference on Thursday.

“It’s in the national interest and it’s about safety … to prevent an act of terror from ever happening again in our country,” she said of the ban.

Ardern said she expects the new law to be in place by April 11 and buy-back schemes will be established for banned weapons.

“Now, six days after this attack, we are announcing a ban on all military-style semi-automatics (MSSA) and assault rifles in New Zealand,” Ardern said.

She said the gunman arrested in the attacks on two Christchurch mosques had purchased his weapons legally and enhanced their capacity by using 30-round magazines “done easily through a simple online purchase”.

“Related parts used to convert these guns into MSSAs are also being banned, along with all high-capacity magazines,” she said.

“In short, every semi-automatic weapon used in the terrorist attack on Friday will be banned in this country.”

Ardern said the interim measures announced on Thursday will stop a rush of purchases before legislation on the measures takes effect next month.

She added there would be some limited exemptions for New Zealand’s farmers, many of whom require firearms for pest control and management of their livestock.

Ardern’s move came six days after a gunman entered the Al Noor and Linwood mosques and killed 50 people in an indiscriminate shooting spree.

Police confirmed on Thursday that all 50 victims of the Christchurch attacks had been identified by coroners, while funerals continued to take place as relatives collected their loved ones’ bodies from authorities.

“I can say that, as of a few minutes ago, the identification process and to all 50 victims has been completed and all of the next of kin have been advised,” Police Commissioner Mike Bush said at a press conference in Wellington.

“That is a landmark for this process,” he added.

Australian Brenton Tarrant, 28, a white supremacist who was living in Dunedin, on New Zealand’s South Island, has been charged with murder following the mosque attacks on Friday.

However, police said in a statement on Thursday that the person he was formally accused of killing had been wrongly declared dead, adding Tarrant’s charge sheet would be updated when he next appeared in court on April 5.

Tarrant, who was remanded without a plea in his initial court appearance on Saturday, is expected to face more charges then.

The scale of the attack he is suspected to have carried out has caused global revulsion, including for his use of social media to livestream the carnage in real-time.

In a rambling “manifesto”, Tarrant said he was motivated partly by a desire to stoke religious conflict between Islam and the West by targetting “invaders”.

Analysts welcomed the prime minister’s move on weapons legislation in response to the massacre, saying despite the nation’s outpouring of grief over the incident, “thoughts and prayers don’t make much difference” but “actions” do.

“What we are seeing at the moment is not political populism, or politicians taking advantage of a terrible situation, it’s actually highlighting political inertia from the past,” Jarrod Gilbert, a senior lecturer on crime and justice at the New Zealand-based University of Canterbury, told Al Jazeera.

Ardern had previously cited Australia’s decision to change its gun laws 12 days after the country’s 1996 Port Arthur massacre, in which 35 people were killed, as a blueprint for amending New Zealand’s laws, saying “we will do it in less”.

Previous governments failed to implement recommendations made by Justice Thomas Thorp in his government-backed 1997 review of gun control in New Zealand.

Thorp’s review culminated in a call for all weapons to be individually registered to their owners, tighter vetting procedures for those seeking to buy weapons and a ban on military-style semi-automatics.

“This isn’t kneejerk by any stretch, these measures have been well considered and overdue,” Gilbert said.

“Nobody is saying that New Zealanders can’t have a firearm … New Zealand is a country that requires firearms, but no one needs a military-style semi-automatic weapon,” he added, citing the example of farmers.

Following Ardern’s announcement, Police Commissioner Bush said there would be an “amnesty” to allow people to hand in now illegal weapons to police.

“For many people, you will now be in unlawful possession of your firearm,” Bush said in a statement.

New Zealand police directed people with questions about gun laws or the ban to their website.

There is clear information on our website around what firearms are affected by the change and what to do if your firearm if affected – https://t.co/9eLHzDdGIM

The country’s foremost hunting body, Fish and Game NZ, said on Wednesday it would support a ban and buy-back of military-style semi-automatic weapons and restrictions on high-capacity magazines.

‘I feel much safer’

Outside a makeshift memorial for the victims of last week’s mosque attacks at the entrance to Christchurch’s Botanic Gardens, passersby and mourners said they supported the government’s move on Thursday.

“Being in a minority group in New Zealand it [the ban] makes me feel much safer, there isn’t the potential anymore for someone to just walk down the road with a military-style weapon that they could unleash on defenceless, unarmed civilians,” he added.

Anna Walker agreed that the ban was a positive move and suggested other countries with similar gun laws should now follow New Zealand’s lead.

“I firmly believe that guns don’t kill people, people kill people, however I think that the ban is good because it takes the opportunity away for people who have that mind set,” she said.

“[But] It’s horrible that it’s come to this, that this [Friday’s attack] is the reason they’ve made this ban … it wasn’t done before and yes, it probably should have been done before.” 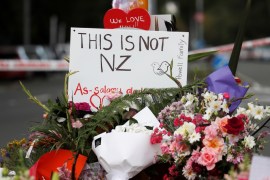 The hypocrisy of New Zealand’s ‘this is not us’ claim

Is Brenton Tarrant really an aberration? 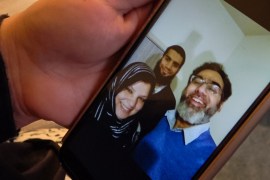 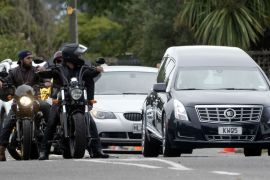 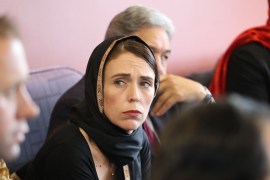 Attacker Tarrant’s desire for infamy made clear by his 74-page manifesto and move to live stream Friday’s attack.