Social media users have condemned Western tabloid newspapers for their coverage of the New Zealand mosque attacks and their attempts to “humanise” the main suspect.

At least 49 people were killed and 40 others were injured in the twin attacks by Australian suspect Brenton Tarrant, 28, who allegedly shot dozens of worshippers in the New Zealand district of Christchurch.

Labelling him an “angelic boy who grew into an evil far-right mass killer” British tabloid, the Daily Mirror, released a photo of Tarrant as a young boy and described him as “a likeable and dedicated personal trainer running free athletic programmes for kids”.

Reacting to the coverage, British columnist Owen Jones condemned the tabloid’s coverage saying it had displaced the focus from the victims to the perpetrator, who he called a “terrorist”.

There is absolutely no chance a newspaper would splash a childhood photo of an Islamist terrorist who murdered 49 Christians in a church as an “angelic boy”. Displacing focus from the victims to oh how could such a sweet WHITE boy become a terrorist is abhorrent pic.twitter.com/pcQCOBzMpT

British creative director Nooruddean Choudry also criticised the tabloid’s headline saying that while the victims were ignored, Tarrant was being humanised.

What a perverse angle to take on such a barbaric act of terrorism. None of the victims are humanised or mourned. Instead the terrorist was an 'angelic boy' and the first paragraph describes him as 'hard-working'. Scumbags pic.twitter.com/A9x8mPd210

British journalist and BBC presenter Shaimaa Khalil criticised the headline and condemned the Daily Mail for the use of similar language, referring to Tarrant as the “ordinary white man” in its headline on Friday.

49 Muslims were massacred in 2 mosques during prayers.
But enough about them! Do tell us about the “Angelic boy” and the “ordinary white man” who mowed them down… @DailyMirror @MailOnline where to begin…#NewZealandMosqueAttacks #ChristchurchShooting pic.twitter.com/QiQG5IT9Jt

On Saturday, the Daily Mail reported that the alleged attacker’s grandmother had reacted in disbelief to the incident, describing Tarrant as “a good boy”.

While the majority of social media reactions have focused on British newspapers, Australian tabloids were also criticised for their coverage.

Like the Daily Mirror and the Daily Mail, several Australian tabloids focused on the main suspect, rather than the killings and included images taken from the livestream of the incident, despite requests from New Zealand and Australian police to not share the footage.

The front page of the West Australian showed images of the attack and reported Tarrant’s description of himself as: “Just an ordinary White man, 28 years old. Born in Australia to a working class, low income family.”

The page was shared in a now-deleted tweet by the paper’s senior editor Anthony De Ceglie, reported the Guardian.

Sky New Zealand later deleted that tweet replacing it with one that said the broadcast suspension was about protecting the integrity of the investigations.

We stand in support of our fellow New Zealanders and are working with our colleagues at @SkyNewsAust to ensure coverage doesn’t compromise ongoing investigations in NZ. We made the decision on Friday with Sky News Australia to replace their live news with sport.

The Australian suspect, who appeared in a Christchurch District Court on Saturday, was charged with murder. He was remanded without a plea until his next appearance in the South Island city’s High Court on April 5.

Handcuffed, shoeless, and wearing a white prison suit, Tarrant grinned but did not speak as he flashed an upside-down “okay” signal, a symbol used by white power groups across the globe. 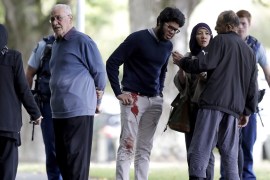 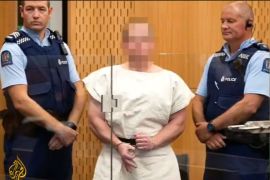 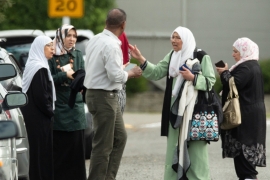