Israel has launched air attacks on Gaza hours after rockets were allegedly fired near Tel Aviv, raising fears of a major escalation in the Israeli-Palestinian conflict.

The Israeli military, in a post on Twitter, said it targeted 100 Hamas targets in Gaza, including an office complex used to plan and command the group’s activities, an underground complex that served as its main-rocket manufacturing site, and a centre used for drone development.

The Israeli military said the attacks were in response to rockets fired by Hamas at Israeli civilians – a claim the group has denied.

Palestinian news media reported raids throughout Gaza, from Rafah in the south to the north of the densely populated coastal strip that is home to two million Palestinians.

Maher Abdullah, a programme officer at Save the Children charity, said he and his family stayed awake all night because of the bombings in Gaza City.

“My children were already asleep but then the heavy bombardments started and they woke up screaming,” he said in a statement.

“We tried to reassure them that it was thunder, but they know now that thunder doesn’t shake a whole building the way ours was … What happened last night has happened many times and we fear for what will happen next.”

#Photos of the destruction caused by the Israeli occupation strikes on the Gaza strip last night.#GazaUnderAttack pic.twitter.com/yqVMW35KQ8

The late-night attack on Tel Aviv, Israel’s densely populated commercial and cultural capital, marked a dramatic escalation in hostilities. It was the first time the city had been targeted since a 2014 war between Israel and Hamas.

The rockets triggered air raid sirens across the city. Explosions were heard in Tel Aviv and witnesses said Iron Dome interceptor missiles were fired skyward and detonated – although the military said no rockets were shot down.

“I heard the rocket and I heard the siren going off. It was a bit surprising, I didn’t think that, you know, it could really reach Tel Aviv,” said resident Yonah Zeff.

The salvo missed built-up areas and caused no casualties or damage.

Ron Huldai, mayor of Tel Aviv, said he had ordered the city to open public air raid shelters as a protective measure. But he said there were no special instructions and encouraged residents to stick to their daily routines.

Hamas has denied responsibility for the attack on Tel Aviv, saying the rockets were launched when the group’s military wing was meeting with Egyptian mediators to try to strengthen a ceasefire with Israel.

In an unusual step that indicated Hamas was attempting to prevent further escalation, the interior ministry in Gaza said the rocket fire went “against the national consensus” and promised to take action against the perpetrators.

“These accusations are mere lies by the Israeli occupation,” said Daoud Shihab, a spokesman for Islamic Jihad. “Our movement and its military wing the Al-Quds Brigades did not fire any rockets,” he told Palestinian news agency Quds Network.

Israel has long said it holds Hamas responsible for all violence from Gaza, controlled by the group since 2007.

The sudden outburst of fighting comes at a sensitive time for both sides. Israel is holding national elections in less than a month. Prime Minister Benjamin Netanyahu is locked in a tight fight for re-election and could face heavy criticism from his opponents if he is seen as ineffective against the violence.

Netanyahu met with defence chiefs at military headquarters in Tel Aviv after the rockets were fired, and Israel’s response began later.

Likewise, Hamas has come under rare public criticism in Gaza for the harsh conditions in the territory.

An Israeli-Egyptian blockade, combined with sanctions by the rival Palestinian Authority and mismanagement by the Hamas government, have fueled an economic crisis in the territory. Residents have little desire for another war with Israel.

Israel and Hamas have fought three wars since the group seized control of Gaza.

Hamas possesses a big arsenal of rockets and missiles, but it has sought to contain violence with Israel since the 2014 last war.

Tensions have been high for the past year along the Israel-Gaza frontier since Palestinians began popular protests near Israel’s fence west of the Gaza Strip.

The response from the Israeli military has often been lethal, with around 200 Palestinians killed in the demonstrations.

About 60 more Palestinians have died in other incidents, including exchanges of fire across the border. Two Israeli soldiers have been killed by Palestinian fire. 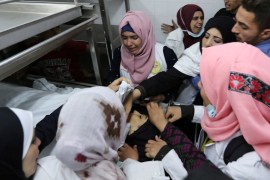 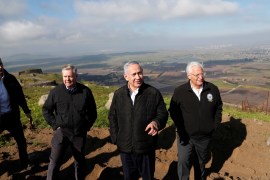 Senior US official says the change in description does not mean a change in their policy regarding the Golan Heights.