US regulators ordered Boeing to make urgent improvements to the best-selling jet involved in a deadly Ethiopia plane crash – but ruled out grounding the fleet as investigators worked to piece together the aircraft’s final moments.

The Ethiopian Airlines Boeing 737 MAX 8 crashed minutes into a flight to Nairobi on Sunday, killing all 157 people on board and prompting airlines across the world to begin withdrawing the model from schedules.

The US Federal Aviation Administration (FAA) said it was working with local authorities and the National Transportation Safety Board and may soon share safety information concerning the aircraft.

“If we identify an issue that affects safety, the FAA will take immediate and appropriate action,” it said in a statement.

The FAA said it was ordering Boeing to make improvements to anti-stalling software and the manoeuvring system, giving the company until the end of April to make the updates. A team of US aviation experts from the FAA was at the site on Tuesday.

Tamrat Abera, a witness who saw the plane go down, told The Associated Press smoke was coming out of the rear and the aircraft rotated twice before hitting the ground.

The Ethiopian Airlines aircraft was the same type as the Indonesian Lion Air plane that crashed in October, killing 189 passengers and crew.

Not since the 1970s – when the McDonnell Douglas DC-10 had successive fatal incidents – has a new model been involved in two deadly accidents in such a short period.

Several airlines have grounded their fleet of Boeing 737 MAX aircraft after an #EthiopianAirlines crash killed all 157 people on board – It’s the second deadly crash involving a 737 MAX in less than 6 months. pic.twitter.com/pv7H3xxZYb

There are still unanswered questions about the causes of the Lion Air crash, and officials and safety experts said it was too soon to draw links with the Ethiopian Airlines incident.

Aviation consultant Keith Mackey told Al Jazeera the profiles of the two crashes were different, noting the Lion Air plane climbed to 1,800 metres before diving, while the Ethiopian Airlines aircraft reached only 300 metres before plummeting to the ground.

“This is completely different to what happened to Lion Air, and that’s going to be part of the investigation – determining what the differences were, if there were any similarities between the two situations, and then finding and correcting the cause,” Mackey said.

The FAA acknowledged the crashes were being linked in media reports but said the investigation had “just begun” and so far no data had been provided to “draw any conclusions or take any actions”.

Airlines in Brazil, China, Ethiopia, Indonesia, South Africa, Mexico and other countries said they were suspending operations of their 737 MAX 8 fleets. Pilots from Argentina’s Aerolineas Argentinas refused to fly the aircraft.

Boeing on Monday confirmed it will deploy a software upgrade to the 737 MAX 8, a few hours after the FAA directive to do so came down.

The company said in the aftermath of October’s Lion Air Flight crash that it had, for several months, “been developing a flight control software enhancement for the 737 MAX, designed to make an already safe aircraft even safer”. The software upgrade “will be deployed across the 737 MAX fleet in the coming weeks,” it said in a statement.

Boeing did not reference Sunday’s crash in connection to the software upgrade.

“We are confident in the safety of the 737 MAX and in the work of the men and women who design and build it,” Boeing Chief Executive Officer Dennis Muilenburg told employees in an email seen by Reuters news agency on Monday.

“Since its certification and entry into service, the MAX family has completed hundreds of thousands of flights safely.

“Speculating about the cause of the accident or discussing it without all the necessary facts is not appropriate and could compromise the integrity of the investigation,” Muilenburg told his staff.

Investigators recovered the black box flight recorders from the airliner, which went down near Addis Ababa, just six minutes after take-off after the pilot alerted controllers of “difficulties”.

There were passengers and crew from 35 countries on board, including some two dozen UN staff. 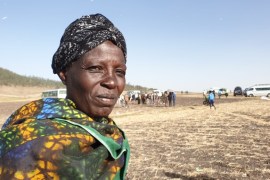 Ethiopian Airlines crash: ‘I prayed for their souls’

Villagers near site of downed plane struggle to cope with trauma in aftermath of fatal Ethiopian Airlines accident. 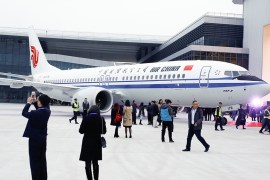 A number of countries have grounded Boeing’s 737 MAX 8 medium-haul workhorse jet in response to the Ethiopia crash. 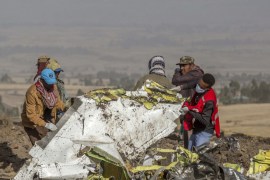