The United States has vowed to remain “relentless” in pressuring Iran to deter its missile programme after the Islamic Republic unveiled a new ballistic weapon days after testing a cruise missile.

“Iran’s defensive capability is deterrent [in nature] and in line with preserving its national security, and it cannot be subjected to any transaction or negotiation,” Major General Mohammad Ali Jafari, commander of the IRGC, said.

The IRGC’s surface-to-surface missile, dubbed Dezful after a city in western Iran, has a shorter range than the Hoveizeh cruise missile it tested earlier this month.

It is also within the 2,000km range that Iran has voluntarily set for itself, although it is sufficient to reach Israel and Western military bases in the Middle East. According to experts, a missile requires a 10,000km range to reach the US.

The IRGC is under the command of Iran’s Supreme Leader Ayatollah Ali Khamenei.

The move was the latest show of military might by the country, as it celebrates the 40th anniversary of the Islamic Revolution at a time of heightened tensions with the US.

“We must bring back tougher international restrictions to deter Iran’s missile programme,” he added.

“The United States will continue to be relentless in building support around the world to confront the Iranian regime’s reckless ballistic missile activity, and we will continue to impose sufficient pressure on the regime so that it changes its malign behaviour – including by fully implementing all of our sanctions.”

Tehran reined in most of its nuclear programme under a landmark 2015 deal with major powers but has kept up development of its ballistic missile technology, as part of its defence strategy.

United Nations Security Council Resolution 2231 – adopted just after the nuclear deal – calls on Iran “not to undertake any activity related to ballistic missiles designed to be capable of delivering nuclear weapons”.

Tehran insists that its missile development programme is “purely defensive” and compliant with the UN resolution, adding that it is not pursuing any nuclear weapons programme.

The UN nuclear watchdog, IAEA, also said in its latest report that Iran continues to abide by the nuclear agreement, also known as the Joint Comprehensive Plan of Action (JCPOA).

President Donald Trump pulled the US out of the nuclear accord in May and reimposed sanctions on Iran, citing the missile programme among its reasons for withdrawing.

Iran and the other signatories have stuck by the 2015 agreement, although some European governments have demanded an addition to address Tehran’s ballistic missile programme and its intervention in regional conflicts.

On Thursday, Jafari, the IRGC commander, insisted that Iran’s ballistic missile programme is non-negotiable, reflecting a long-standing policy of Tehran.

Al Jazeera’s Zein Basrawi, reporting from Tehran, said that the unveiling of the latest missile “is a signal by Iran to its enemies, that they have the ability to retaliate when fired upon”. 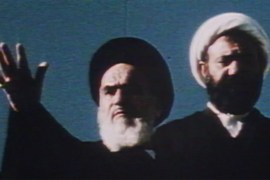 Iran 1979: Anatomy of a Revolution

A look at the events that triggered the Khomeini movement and led to Iran’s Islamic revolution in 1979. 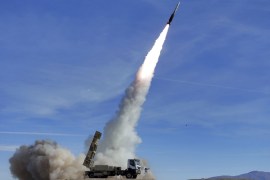 Defence Minister Hatami calls the Hoveizeh missile the ‘long arm of the Islamic Republic of Iran’ in defending itself. 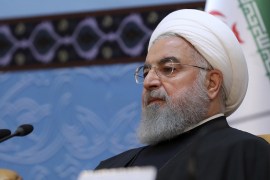