Cucuta, Colombia – Trucks carrying food and medical supplies from the United States have arrived in Cucuta, on the Colombia-Venezuela border, stoking tensions with the government of President Nicolas Maduro in Caracas.

The arrival of the aid convoy on Thursday, which was organised jointly by the US and Venezuelan opposition leaders, came a day after Venezuela barricaded its own side of the border vowing not to allow entry.

“We are not beggars,” Maduro told the military earlier this week, rejecting the move as a ploy to humiliate Venezuela.

Amid uncertainty over the convoy’s fate, demonstrators at the Tienditas bridge entrance welcomed the trucks by blowing horns and calling for a change in crisis-hit Venezuela. Among a media scrum, some shouted, “Maduro out now”.

Opposition leader Juan Guaido, the self-proclaimed interim president who has earned recognition from the US and a number of other countries, requested international assistance saying it was essential in a country that has been ravaged by shortages of basic food and medicine.

Maduro, who is backed by countries such as China, Russia and Turkey, has repeatedly denied a humanitarian crisis exists in Venezuela.

Venezuela’s socialist economic system has been severely hit following the collapse of world oil prices in 2014. Inflation has skyrocketed, and since 2016, more than three million Venezuelans have fled to neighbouring countries amid a shortage of food and medicine in the country.

“It is a cowardly action he’s made,” Rivas told Al Jazeera, referring to Maduro’s bridge closure.

US officials have also criticised the decision, pledging to move humanitarian assistance into Venezuela as soon as it was safe to do so.

In a Twitter post on Wednesday, Mike Pompeo, the US secretary of state, said “Venezuelan people desperately need humanitarian aid” and that “the regime must let aid reach starving people”.

The Venezuelan people desperately need humanitarian aid. The U.S. & other countries are trying to help, but #Venezuela’s military under Maduro's orders is blocking aid with trucks and shipping tankers. The Maduro regime must LET THE AID REACH THE STARVING PEOPLE. #EstamosUnidosVE pic.twitter.com/L4ysYJaM6H

For his part, Maduro has continuously denounced Washington’s interference in Venezuelan affairs.

In an open letter to the White House on Thursday evening, the president said: “Your representatives want to bring the same hate that you sewed in Vietnam to our borders. You want to invade and intervene in Venezuela in the name of democracy and freedom. But that is not the case.”

While it is still unclear about the outcome of the planned aid delivery, the Colombian government has said the supplies will not be distributed in Colombia but in Venezuela, urging Venezuelans not to come to Cucuta in search of it.

Meanwhile, the flow of Venezuelans entering neighbouring Colombia via the main border crossing to buy basic supplies continued as normal on Thursday.

More than 50,000 people cross into Cucuta per day, with up to 5,000 staying in Colombia, according to Colombian migration officials.

Many cross to purchase food and medicine that is unavailable in Venezuela and then return, while others use it as their first port of call as they migrate elsewhere in Colombia or to countries such as Ecuador and Peru.

Crossing with his wife and brother, Julio Coronel said he made this trip once a week to buy vegetables, flour, eggs and rice.

“It’s indispensable,” the 66-year-old from Tachira state said, on the need for aid. “We are in an unbelievable crisis, but Maduro keeps saying we aren’t. He’s crazy and what he is doing should be illegal!”

The United Nations has appealed for a cash injection of $738m this year to help Venezuela’s neighbours cope with the mass exodus.

The Regional Refugee and Migrant Response Plan has allocated $315m to Colombia, $117m to Ecuador, $106m to Peru and $56m to Brazil – the countries hosting the most Venezuelan migrants.

According to the UN, the appeal has only received $5m so far. 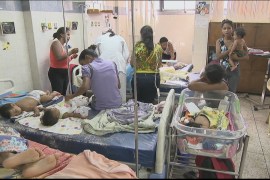 ‘They have no medicine or food’: Venezuela’s healthcare crisis

Hospital in Barcelona says 14 children have died in the past week from contaminated food and water. 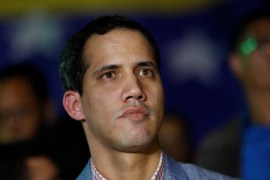