Heavy rain and melting snow caused rivers to burst their banks and cause flooding across Bosnia, damaging houses and blocking roads.

A bridge in the capital, Sarajevo, collapsed after the River Zeljeznica overflowed.

In the space of 24 hours, temperatures jumped from 0C to 15C, causing snow to melt rapidly and trigger floods in central parts of the country.

Zenica and Kakanj, towns in central Bosnia, declared a state of emergency as streets in some neighbourhoods were inundated by water and rescue services began evacuating people from their homes on rubber boats.

Schools in the most affected areas of central Bosnia were also forced to stay shut on Monday.

In Topcic Polje, dozens of homes were evacuated as rescue services built small dams to prevent the further spread of flood waters. Main roads leading in and out of Topcic Polje were damaged by a heavy stream of water which descended from the surrounding mountains.

Bosnian rescue services raised security alerts for central parts of the country and evacuated hundreds of elderly residents from their homes.

Several landslides were also reported in the south of the country. There are no reports of deaths or injuries.

No further rain or snow is expected in the next few days but with temperatures around 9C or 10C, further snow-melt is expected. This is likely to swell the major rivers in the region close to or above normal levels. 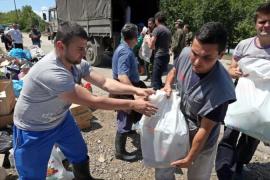 After the Balkan floods: Unity and compassion

The Balkans floods have unleashed an unprecedented humanitarian response that cuts across borders. 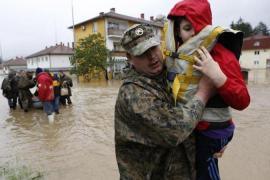 At least 20 dead and thousands forced from homes in Serbia and Bosnia as flooding causes landslides and power cuts.