Saudi Arabia and its coalition partner in Yemen, the United Arab Emirates (UAE) transferred US-made weapons to al-Qaeda-linked groups and a Salafi militia whose commander who once “served with” the Yemeni branch of ISIL, a CNN investigation has found.

Corroborating an earlier report by Al Jazeera, the CNN investigation said that the weapons had also made their way into the hands of Houthi rebels who are battling against the coalition for control of the country.

Saudi Arabia and the UAE entered Yemen’s war in 2015 leading a military coalition to try and restore the internationally recognised government of President Abd-Rabbu Mansour Hadi.

The two Gulf countries wanted to restore the Hadi government after a civil war broke out between Hadi’s supporters and those loyal to the Houthis.

But according to CNN, the coalition was using US-manufactured weapons “as a form of currency to buy the loyalties of militias or tribes, bolster chosen armed actors, and influence the complex political landscape,” local commanders and analysts said.

According to the Pentagon, the Gulf monarchies were breaking the terms of their arms deal with Washington.

A US defence official told CNN that there was an ongoing investigation into the issue.

‘The coalition is still supporting me’

Citing the situation in the flashpoint city of Taiz, CNN said that al-Qaeda had forged “advantageous alliances with the pro-Saudi militias they fought alongside”.

It said the Abu al-Abbas Brigade possessed US-made Oshkosh armoured vehicles that were paraded through the city in a 2015 show of force.

Abu al-Abbas, the militia’s founder, was sanctioned by the US in 2017 for allegedly financing al-Qaeda and the Yemeni chapter of the Islamic State of Iraq and the Levant (ISIL, also known as ISIS) group.

“The coalition is still supporting me,” al-Abbas said in an interview in December with the Washington Post. “If I really was a terrorist, they would have taken me in for questioning.”

According to CNN, his group still enjoyed support from the Saudi-led coalition and was absorbed into the coalition-supported 35th Brigade of the Yemeni army.

“The United States has not authorized the Kingdom of Saudi Arabia or the United Arab Emirates to re-transfer any equipment to parties inside Yemen,” Pentagon spokesperson Johnny Michael told CNN.

“The US government cannot comment on any pending investigations of claims of end-use violations of defence articles and services transferred to our allies and partners,” Michael added.

US weapons in Houthi hands

According to the report, US-made weapons also ended up in the hands of Houthi rebels.

In September 2017, a Houthi-run TV channel broadcast images of Mohammed Ali al-Houthi, a senior Houthi leader, sitting behind the wheel of a captured US-made Mine-Resistant Ambush Protected vehicle (MRAP) in the capital Sanaa, as a crowd chanted “death to America” in the background.

CNN also obtained an image showing the serial numbers of a second MRAP in the hands of another senior Houthi official last year in Hodeidah.

The sale document, seen by CNN, certifies that “a determination has been made that the recipient country can provide the same degree of protection for the sensitive technology” as the US.

Hiram Al Assad, a member of the Houthi political council, confirmed to CNN that the MRAPs were still in Houthi hands but denied reports that the vehicles had been probed by Iranian intelligence.

The US is by far the biggest supplier of arms to both Saudi Arabia and the UAE, and its support is crucial to the Saudi-led coalition’s continuing war in Yemen.

In his first overseas trip as president, US President Donald Trump sealed an arms deal with Saudi Arabia worth about $110bn over several years. The agreement was said to be aimed at bolstering security “in the face of Iranian threats”.

According to CNN, the revelations raise fresh questions over whether Saudi Arabia is responsible enough to be allowed to continue buying sophisticated US arms and other military hardware.

Out of the 18,000-plus raids the Saudi-UAE coalition has launched since the start of the conflict, nearly a third of all bombs have hit civilian targets, according to the Yemen Data Project, a monitor of the war in Yemen.

The developments also come as Congress, outraged with Riyadh over the murder of Saudi journalist Jamal Khashoggi last year, considers whether to force an end to the Trump administration’s support for the Saudi-UAE coalition. 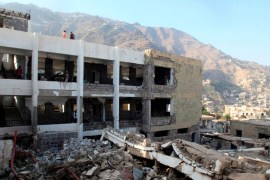 Will the US end its involvement in the Yemen war?

A group of senators, led by Bernie Sanders, plans to resubmit a draft bill to stop US support for the war in Yemen. 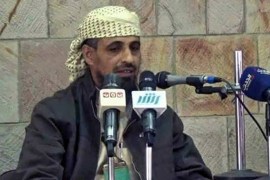 Cars, guns and TV interviews: The militiaman on the UAE payroll

Sources tell Al Jazeera that Abu al-Abbas, a Yemeni designated by the US as a terrorist, is receiving UAE support. 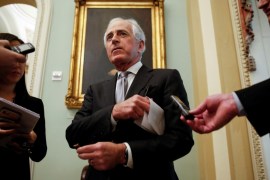 Defying Trump, US Senate votes to end US support for Yemen war