Iraqi President Barham Salih has said US President Donald Trump did not ask Iraq’s permission for US troops stationed there to “watch Iran”.

Salih was responding on Monday to Trump’s comments to US media in which he said American forces would remain at a US base in Iraq to keep a close eye on neighbouring Iran.

The Iraqi leader, speaking at a forum in Baghdad, said US troops in the country are there as part of an agreement between the two countries with a specific mission of combating “terrorism” and that any action taken outside that framework is “unacceptable”.

“Don’t overburden Iraq with your own issues,” Salih said. “The US is a major power … but do not pursue your own policy priorities, we live here.”

“It is of fundamental interest for Iraq to have good relations with Iran” and other neighbouring countries, he added.

Trump, in his interview with CBS’ Face the Nation on Sunday, said it was important to keep a US military presence in Iraq so Washington can keep a close eye on Iran “because Iran is a real problem”.

“We spent a fortune on building this incredible base, we might as well keep it. And one of the reasons I want to keep it is because I want to be looking a little bit at Iran,” he said in an apparent reference to Ayn al-Asad Airbase in western Iraq, which he visited during an unannounced trip to the country in December.

Some of the US troops pulling out of Syria will relocate to American bases in Iraq, he said.

US troops had to stay in the Middle East to protect Israel, Trump added.

The New York Times reported that the US has been quietly negotiating with Iraq for weeks to allow US special forces and support troops now operating in Syria to shift to bases in Iraq and strike the Islamic State of Iraq and the Levant (ISIL, also known as ISIS) from there.

That would allow military leaders to maintain pressure on the armed group even as officials follow Trump’s orders to withdraw some 3,000 troops from Syria.

Citing two US officials, the New York Times said on Sunday that senior US military officers recently visited several Iraqi bases, including in Erbil and the Ayn al-Asad Airbase, to determine if existing US operations there could be expanded with troops moving in from Syria.

But Trump’s comments to CBS could undermine those negotiations by inflaming fears among Iraqis that US military activity in Iraq will be aimed at checking Iran, and not defeating ISIL, the Times said.

Hassan Karim al-Kaabi, Iraq’s deputy speaker of parliament, called Trump’s comments a “blatant and overt violation of sovereignty and national will”, according to Rudaw, a Kurdish-Iraqi media network.

Citing a statement by al-Kaabi, Rudaw said the deputy speaker pledged to pass a law “terminating the security agreement with America, in addition to ending the presence of American military trainers and advisors and foreigners on Iraqi soil”.

Trump did not meet any Iraqi officials during his three-hour stay there. A scheduled meeting with Iraqi Prime Minister Adel Abdul Mahdi was scrapped and the two leaders spoke over the phone instead.

Iraqi legislators told Reuters news agency that the two leaders had disagreed over where their planned meeting should take place: Trump had asked to meet at the military base, an offer Abdul Mahdi declined. 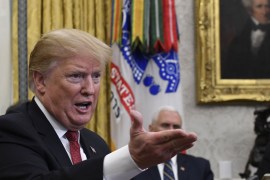 US needs military base in Iraq to ‘watch Iran’, Trump says

US president accuses Iran of stirring regional conflicts and being ‘the number one terrorist nation in the world’. 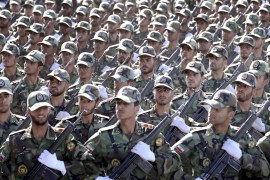 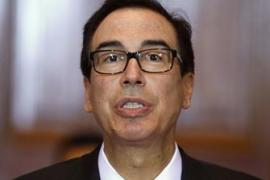