The United States has started to thaw out after a week of extremely cold weather.

The fast-rising temperature, however, may not be all good news, meteorologists have warned.

They indicated that the thaw may cause a new set of risks, including flooding on streets and in homes, ice jams in lakes, and slippery sidewalks and driveways.

The national lowest temperature was measured at -48.9 degrees Celsius in Chicago, Illinois during the cold streak.

According to the World Meteorological Organization, the harsh weather was caused by the influence of the polar vortex, which is a large area of low pressure and cold air surrounding the North Pole and is normally trapped by strong counterclockwise winds.

As temperatures rose, schools reopened, businesses resumed and people came back on the streets that had been empty for days in Chicago.

“I like the warmer weather a lot. I stayed inside when it was cold. It’s wonderful that it’s warmer and I hope it lasts a long time,” said a local resident.

Temperatures are expected to reach 11-12C in Chicago on Sunday and Monday.

This warm weather looks set to be short-lived with a maximum of around -1C on Tuesday, which brings the threat of the thaw turning back to the ice. 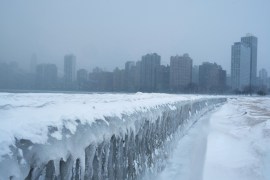 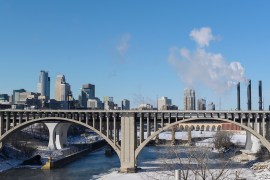