Nayib Bukele, a businessman and former mayor of San Salvador who has painted himself as an alternative to the traditional parties, led the polls ahead of the vote, followed by supermarket mogul Carlos Calleja of the conservative Nationalist Republican Alliance (ARENA) party.

About 5.2 million registered voters were expected to cast ballots from 7am local time (13:00 GMT) to 5pm.

Preliminary results are expected within hours after polls close. If no candidate receives more than 50 percent of the votes, the two frontrunners will head to a runoff on March 10. The new president will take office on June 1 for a five-year term.

Fed up with El Salvador‘s high crime rate, Maria Cruz, 48, says “change” is her top priority. She wears a sky blue silicone bracelet lined with Bukele’s logo and says she previously voted for the FMLN. “I’m very disappointed,” she says of recent governments. “They didn’t do anything but rob the country.”

Cruz’s daughter-in-law, Iris Chinchilla, 25, says there have been positives with the FMLN, but she also throws her support behind Bukele. “We have to try something new,” she says.

A recent Mitofsky poll projected a first-round win for Bukele, but CID-Gallup predicted a runoff scenario between him and Calleja.

The frontrunner, credited with breathing new life into the capital’s historic centre as mayor from 2015 to 2018, proposes creating a United Nations-backed anti-corruption mission, the International Commission Against Impunity in El Salvador (CICIES), following the model of Guatemala’s CICIG.

His plans for infrastructure projects include a new airport, a cross-country train and 20 public works a day in five years in office.

Calleja pledges to create 300,000 jobs in agriculture, industry, tourism, services and other sectors. He also proposes to increase investment in healthcare, education and security. The 42-year-old corporate executive is a newcomer to politics.

Martinez, who boasts the most political experience, promises to deepen the FMLN government’s gains over the past decade in healthcare and education, create 385,000 jobs, and strengthen the police force to fight crime. Martinez is the only candidate to highlight the environment as a key platform pillar in the country facing an acute water crisis and vulnerability in the face of climate change.

Both Calleja and Martinez dismiss Bukele’s CICIES plan as unnecessary, saying the country should focus on strengthening its institutions to combat corruption.

Three out of four of El Salvador’s most recent presidents, from ARENA and the FMLN, have been investigated for embezzling millions from public coffers. Bukele faces an investigation for possible tax evasion.

Maria Pineda, a 20-year-old psychology student, had not decided ahead of the election if she would bother casting a ballot, but said she would vote for Bukele if she did. Worried about violence and scarce job opportunities, she laments the “unclear” proposals from all the candidates. But she says a fresh face and a break from the traditional parties could be good for the country.

A win for Bukele would break with three decades of two-party control over the executive. ARENA and FMLN have held top office since the country’s 12-year civil war came to an end in 1992.

“Traditional politics has suffered a decline in El Salvador,” says Danilo Miranda, a political science professor at the Jose Simeon Cañas Central American University in San Salvador. “There’s been a generational change, which has worn out the very identity of the principal political forces.”

Miranda says Bukele’s popularity could signal the “end of a political cycle” that began in the early 1990s. “We can only conclude there has been a political realignment after at least two consecutive elections, when a form of electoral voting is established,” he says.

He adds that GANA, the right-wing party Bukele joined, “is a party from traditional politics with the most traditional politicians”. GANA is an offshoot of the ARENA party. Bukele opted to run on GANA ticket after the FMLN ejected him in 2017 and he was unable to consolidate his own party.

Miranda adds new political players will not easily translate into transformation. “The system of political parties can change, there can be a new political cycle, but social relations and inequality will remain untouched,” he says.

Street vendor Luis Angel Ruiz, 39, has always been an FMLN voter and is not changing course this election. “People who have the least resources have benefited the most,” he says of the FMLN government, flashing an FMLN keychain. Like many voters, his top concern is the country’s high rate of violent crime.

About 23,300 police were stationed to guard polling places. 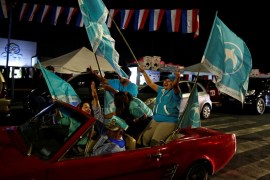 Insecurity and violence are top concerns among Salvadoran voters, but presidential candidates say little about them. 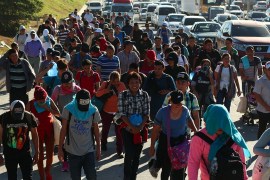 Undeterred by Trump’s threats and US policies, another group of migrants leaves El Salvador. 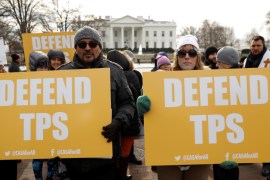 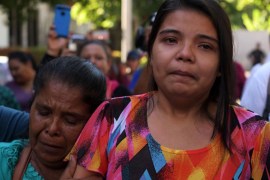 Imelda Cortez was freed after judge acquitted her of lesser charges in a case that tested country’s strict abortion ban.