Nigeria‘s president has defended his sweeping win of a second term as free and fair and appealed to a “common love of country” as his top challenger vowed to go to court with allegations of fraud.

President Muhammadu Buhari was declared the clear winner by nearly 4 million votes in the early hours of Wednesday as citizens of Africa’s largest democracy gave him another chance to tackle gaping corruption and widespread insecurity.

The 76-year-old incumbent of the ruling All Progressives Congress party, secured 56 percent, or 15.2m votes, in the February 23 polls, said Mahmood Yakubu, chairman of the Independent National Electoral Commission.

Abubakar, a billionaire former vice president who made campaign promises to “make Nigeria work again,” quickly rejected the result of what he called a “sham election” and said next steps would be revealed shortly.

As many Nigerians awakened to the win along with the morning prayer, Buhari told colleagues he was “deeply humbled.” He regretted the loss of dozens of lives in “mindless” election-related violence.

“I will like to make a special appeal to my supporters not to gloat or humiliate the opposition,” he said.

At a later event certifying his victory, he added to applause: “Election is not war and should never be seen as a do-or-die affair.”

Rejecting the outcome, Abubakar said he would have conceded “within seconds” if the vote had been free and fair. One obvious red flag, he said, was that states in the northeast ravaged by attacks by armed groups generated much higher voter turnouts than peaceful states.

“It is clear that there were manifest and premeditated malpractices in many states which negate the results announced,” he said.

Boladele Adekoya, PDP spokesman, said evidence for the legal challenge was being compiled for submission to the presidential election tribunal, set up by the Supreme Court.

The election, once described as too close to call, suffered from a surprise weeklong postponement and significant delays in the opening of polling stations.

While observers called the process generally peaceful, at least 67 people were killed during or after Saturday’s vote, according to the Situation Room monitoring group and security sources.

YIAGA Africa, which deployed more than 3,900 observers, said “the announced election results reflect the votes cast”, even if there were problems.

The opposition’s fraud accusations have heightened tensions in the region’s most populous nation and biggest oil producer where six decades of independence have seen long periods of military rule, coups and secessionist wars.

But the controversy could also just peter out, as happened recently after a presidential vote in Democratic Republic of Congo.

“A legal challenge is very unlikely to overturn the official result,” said John Ashbourne, economist at Capital Economics in London, of the Nigerian election.

Nigeria was peaceful after the winner was announced.

Buhari’s supporters danced in the streets and clung to speeding vehicles in a perilous display of exuberance.

“He is a man of integrity,” a Buhari supporter in the northern city of Kano, Mohammed Aliyu, said as jubilant people held up four fingers to mark the new term.

“He is the only leader in Nigeria today that does not accumulate wealth.”

But John Orerere, an Abubakar supporter in Kano, said the “rigging was so obvious”.

“You cannot expect someone to be smiling after robbing him of his hard-earned result,” said Anthony Chigbo, a political activist in southeastern Anambra state.

A civil rights activist, Musa Babn Iya, asserted that Nigerians were not interested in going to court but instead were thinking about “how to get out of this hardship” of simply getting by.

Buhari’s party rejected Abubakar’s allegations of manipulation of results and called on Abubakar to accept his loss gracefully.

British Prime Minister Theresa May and the leaders of Kenya, Ghana, Senegal and Niger sent their congratulations to Buhari. 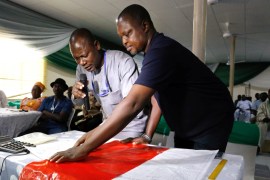 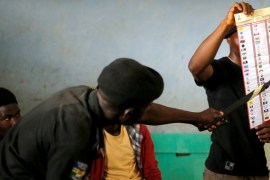 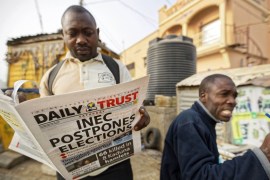 It was not just bad weather and arson that delayed the Nigerian election.