Al Jazeera’s Investigative Unit has obtained documents that reveal the wider use of encrypted “self destruct” messaging systems by US law enforcement agencies, raising serious questions about accountability and transparency.

Their patrol officers were on the front line, policing the public unrest that shook the town of Ferguson, near St Louis, after the shooting of an unarmed African American by a white police officer.

Following the protests in Ferguson, Black Lives Matter became internationally recognised for its campaign against the killing of African-Americans by police.

“It’s particularly alarming that any police entity would, in a systemic and organised manner, use a burner app for their communications,” explained Mark Pedroli, a lawyer with the Missouri Sunshine and Government Accountability Project.

“Police particularly are in a position of significant public trust, and it erodes that trust when we learn they burn their messages to one another.”

Silent Phone, like Tiger Text, destroys messages that are sent between users. The “burn functionality” can be set anywhere between one minute and 90 days, after that they are gone forever.

They can also be burned on demand. A request to the Missouri State Highway Patrol for the content of messages sent and received since January 1, 2014, turned up no responsive documents, suggesting the messages haven’t been archived.

“The use of a messaging application that cannot retain messages beyond 90 days violates the states open records act and retention laws,” said Pedroli. He said this could “constitute evidence of knowing and purposeful violation of the law”.

The latest documents obtained by Al Jazeera’s Investigative Unit establish the purchase of Silent Phone – marketed by the company Silent Circle – by law enforcement in Missouri.

In its response, Missouri State Highway Patrol spokesperson Captain John J Hotz stated, “The silent circle app was utilised by the Patrol to protect and encrypt sensitive operational information during high risk operations such as the law enforcement response in Ferguson and following the Stockley verdict in St. Louis.”

The agency wouldn’t comment on how many text messages have been sent via the platform.

The primary role of the Missouri State Highway Patrol is to oversee the state’s highways but it also carries out sensitive operations such as criminal investigations. It has more than 1,000 troopers and over 1,000 civilian personnel.

“This is the software application that originated with a request by Col. Karsten during the St. Louis protest,” wrote a procurement officer in December 2017.

Sandra Karsten was an assistant superintendent with the Missouri Highway Patrol before being promoted to lead the Missouri Department of Public Safety, which manages the Highway Patrol. A spokesperson for the agency didn’t reply to a request for comment.

The St Louis protests referenced in the email are referred to as the Stockley protests. Jason Stockley was a white St Louis police officer who was charged with first-degree murder after he killed an African American suspect in a high-speed car chase in 2011. He was acquitted of the charge in 2017 and protesters took the streets.

Representative Bruce Franks is a Missouri Democrat who was arrested during the Stockley protests. He pointed out to the Kansas City Star that four St Louis police officers were indicted last year for an incident in which they attacked a protester.

“Imagine if these officers used this app, where we would have no record of any of the egregious things they said,” noted Franks. “Imagine if they used disappearing texts to boast about beating up protesters. That’s horrible.”

Al Jazeera discovered last year that the Long Beach Police Department distributed Tiger Text to over 100 police officers who used the application for years destroying hundreds of thousands of messages in the process.

In an email, a spokesperson for the Los Angeles County District Attorney’s Office stated the Justice System Integrity Division is still evaluating the matter. 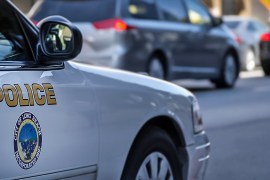