Abuja, Nigeria – Polls have closed in Nigeria‘s closely contested presidential and legislative elections which were delayed by a week due to logistical problems.

There was a huge voter turnout in the capital city, Abuja, with some voters lining up three hours before the polls opened.

“I wanted to be one of the first to vote so I turned up around 6am to wait for my accreditation,” Raymond Okoli told Al Jazeera.

Some waited at the polling stations hours after voting ended to ensure their ballots were properly reflected in the result sheets by officials of the Independent National Electoral Commission (INEC).

More than 84 million voters registered to take part in the general elections.

Seventy-three candidates are running for the presidency, the highest number of presidential hopefuls in the country of nearly 200 million people.

Residents of Maiduguri in Borno State woke up to several explosions.

“Some missiles strayed into vulnerable locations,” it said, but there were no casualties and the fighters retreated.

“Shortly after prayers, we heard like seven explosions. Nobody knows what is going on. This is really unfortunate because it will make some people not go out today to vote,” Jubril Abdulrahman told Al Jazeera.

The explosions did not appear to deter voters from casting their ballots in the city which has come under repeated attacks by Boko Haram.

Security sources, however, say one soldier was killed and four wounded.

There were also reported attacks in Geidam in Northeast Yobe state which forced some residents to flee their homes and hide in the bush.

Explosions were also reported in the oil-rich Niger Delta area where violent groups have been fighting for greater control of resources.

A voter was also shot and killed at a polling station in central Kogi state.

Voters were chased away and ballot papers were destroyed in some polling stations in the commercial capital, Lagos.

The elections were delayed by a week following logistic problems and alleged sabotage by the INEC.

Election materials were not distributed early to some polling centres across the country despite claims by the electoral commission that all logistics problems had been resolved.

Voting did not commence in some cities hours after the 07:00 GMT opening of polls.

“It looks like the one week delay by the INEC did not resolve any problem. We waited for hours before our election materials were brought. Our votes must count despite the delays,” Idika Godwin told Al Jazeera after voting in Ohafia in Southern Abia State.

“The INEC should be better organized than what we experienced today,” he added.

Some voters took to social media to express their frustrations, with some alleging sabotage by electoral commission officials.

Both candidates have expressed hopes of clinching the country’s top job.

“I look forward to a successful transition,” Abubakar told journalists after voting in his Adamawa state home.

Buhari, however, said he will be congratulating himself after the elections. 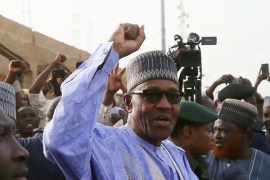 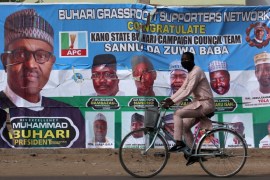 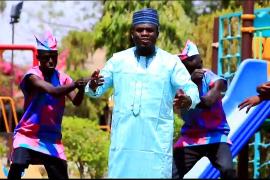