Troops loyal to Maduro fired tear gas and rounds of rubber bullets on Saturday at protesters who tried to bring boxes of US-supplied aid across the border, wounding dozens.

Venezuelan opposition leader Juan Guaido, who is supported by Washington, backed the efforts to import the aid, saying hundreds of thousands of people are in urgent need of food and medicine. Maduro sees the aid as part of a US plot to remove him from power.

At least two people were killed in clashes in the Venezuelan town of Santa Elena de Uairen, close to the border with Brazil.

Throughout the chaotic day, Guaido called on Venezuelan troops to turn against Maduro and join him. Colombian authorities said more than 60 soldiers defected, although most were among the lower ranks of the military.

At the Simon Bolivar international bridge that connects Colombia to Venezuela, the smell of vinegar and tear gas filled the air, as protesters clashed with government forces.

A young man, holding a wet piece of paper over the deep cut above his eyebrow, said he had been hit by a rock.

“I am not going anywhere, I have to stay here,” he said.

Hundreds of people filled the bridge, standing behind a special forces cordon, a few metres away from the burned carcasses of three aid trucks that tried to enter Venezuela.

The background sound of constant gunfire blended with shouted warnings about the incoming injured and the cries of street vendors who, despite the chaos, still tried to sell cigarettes and ice cream.

Violence began early in the day as petrol bombs, stones, and burning branches flew from one side of the border to the other, where the Venezuela National Guard held off protesters with rubber bullets and tear gas.

Luiz Salcedo, a protester, sat in one of the other two aid trucks that turned back in retreat.

“Nothing will make me give up,” he told Al Jazeera from behind a face mask. “We are doing this for our families, who are suffering, who are hungry, unemployed. That gives us special strength to fight, to rescue our country.”

The flow of injured seeking assistance was constant and the crowds of demonstrators parted to make way for them. Some came slumped over the shoulders of strangers, their clothes ripped and bloodied. Others rushed back to the front line after receiving treatment.

“These young people are fighting for our freedom, for our health, for our food,” said Mari Javenes, one of the many volunteers helping out the injured.

She sat in a plastic tent surrounded by medical supplies. Right next to her, a man who had been shot in the eye with a rubber bullet was lifted into an ambulance. “We are devastated, they hit us too hard,” she told Al Jazeera with tears in her eyes.

For others such as 61-year-old Elizabeth, Guaido’s plan was already a success.

“What I hoped for already happened: aid got into Venezuela,” she told Al Jazeera. She is in Colombia for treatment on stage four cancer. If she had stayed in Venezuela, she is certain she “would be dead by now”.

Although she was bound to a wheelchair and wore an oxygen mask, Elizabeth was one of many who stood their ground all day, despite the blasting temperatures.

On Saturday afternoon, Maduro announced the severance of all diplomatic ties with Colombia and ordered its officials in Venezuela to leave the country.

“We can’t keep putting up with Colombian territory being used for attacks against Venezuela,” he said during a rally in Caracas.

“For that reason, I have decided to break all political and diplomatic relations with Colombia’s fascist government. All their ambassadors and diplomats are to leave Venezuela in 24 hours. Get out of here, oligarchs.”

Guaido also addressed his supporters by the end of the day, saying all options are on the table. He also confirmed he would be meeting US Vice President Mike Pence in Bogota on Monday.

Speaking at the same press conference, Colombian President Ivan Duque announced his forces would remove the trucks from all bridges “not to expose them to further aggression”.

“Our objective is to guarantee protection,” he said. 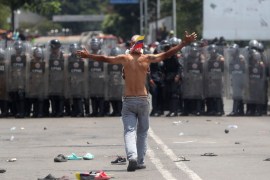 Venezuela’s National Guard fired tear gas at protesters who were trying to clear a barricaded border bridge to Colombia. 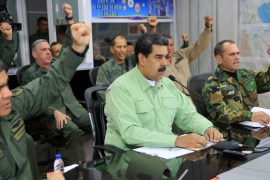