Turkish President Recep Tayyip Erdogan sharply criticised his Egyptian counterpart Abdel Fattah el-Sisi after the recent execution of nine people in Egypt, saying he refused to talk to “someone like him”.

“They killed nine young people recently. This is not something we can accept,” Erdogan said on Saturday in an interview with Turkish TV channels CNN-Turk and Kanal D, referring to the execution on Wednesday of men sentenced for the murder of the Egyptian prosecutor general in 2015.

“Of course, we are going to be told that it is a decision of the judiciary, but there, justice, elections, all that, are nonsense. There is an authoritarian system, even totalitarian,” Erdogan added.

“Now, I am answering those who wonder why Tayyip Erdogan does not speak to Sisi, because there are mediators who come here sometimes, but I will never talk to someone like him,” he said.

Relations between Turkey and Egypt have been virtually non-existent since the Egyptian military, then led by Sisi, overthrew democratically elected President Mohamed Morsi in 2013 – a close ally of Erdogan.

Hundreds of Morsi supporters have been sentenced to death, while Morsi and top Muslim Brotherhood figures have also faced trial.

Egypt outlawed the Muslim Brotherhood and branded it a terrorist organisation in December 2013, just months after Morsi’s removal.

Many of the death sentences have been handed down at mass trials involving hundreds of defendants and lasting just days.

The Turkish president called for the release of Muslim Brotherhood prisoners in Egypt.

“First of all, he should release all those imprisoned with a general amnesty. As long as these people have not been released, we will not be able to talk with Sisi,” he said.

Erdogan also attacked Western countries which, he said, “roll out the red carpet” for Sisi and turn a blind eye to the latest executions in Egypt.

“Where are the Westerners? Have you heard their voices?” he said.

“On the other hand, when it comes to people imprisoned in our country (Turkey), they scream bloody murder.”

Amnesty International condemned the executions of the nine men, who it said were convicted in trials marred by torture allegations.

The comments come as Arab and European leaders convene in Egypt’s Red Sea resort city of Sharm el-Sheikh for the first EU-Arab League summit on Sunday.

Erdogan also said a safe zone along the Turkey-Syria border should be under Turkey’s control.

In the televised interview, Erdogan said Turkey is the first country to be affected by the heavy gunfire.

“I will take my precaution in the opposite country,” he said.

The Turkish president said a peaceful and stabilised environment in Syria’s Afrin, Jarablus and al-Bab provinces should be sustained in border regions.

Ankara wants to set up a safe zone with logistical support from allies and says it should be cleared of the US-backed Kurdish YPG militia, which Ankara considers a “terrorist” group tied to the outlawed Kurdistan Workers’ Party inside its own borders.

“It is important for us that the US decision to withdraw from Syria does not lead to developments against the interests of our countries and Syria’s political unity and territorial integrity,” Erdogan said, adding that a vacuum after the withdrawal to be replaced by “terrorist” groups is unacceptable.

Last December, Trump made a surprise announcement that the US would be withdrawing all of its troops from Syria and said ISIL had been defeated in the country.

Critics have decried a number of possible outcomes from a precipitous withdrawal, including a Turkish attack on Kurdish-led Syrian Democratic Forces, Washington’s main ally in the fight against ISIL, as well as a resurgence of the armed group. 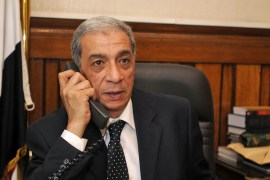 Hangings carried out despite last-minute plea by rights group Amnesty International for a stay of executions.