Sheikh Abdelazeem Salhab was appointed to head the Waqf by neighbouring Jordan, which strongly protested the arrest.

Jordan’s minister of Islamic affairs, Abdul Nasser Abul al-Basal, said the Israeli action was “dangerous and an unacceptable escalation” that affected Jordan’s role as the custodian of Muslim holy sites in Jerusalem, according to the Petra news agency.

Israeli police confirmed the arrest on Sunday, and the Waqf later said police had released Salhab and prohibited him from entering the site for a week.

On Friday, Palestinian protesters streamed into a part of the Al-Aqsa Mosque compound that Israel had sealed off in 2003 because it was home to a heritage organisation allegedly connected with an armed group.

Israeli police accused the Waqf, the Islamic authority that oversees the compound, of attempting to change the status quo at the sensitive site by convening in the closed area last week.

Tensions at the shrine have escalated in recent days with similar protests turning into scuffles with police. Police have since arrested 60 Palestinians suspected of “causing disturbances” and “inciting violence”.

The contested site, revered by Jews as the Temple Mount and by Muslims as the al-Haram al-Sharif, is at the heart of the Israeli-Palestinian conflict.

The compound is the third holiest site in Islam, after Mecca and Medina, and is the holiest site for Jews. It has been a flashpoint of violence in the past.

“He’s the most senior Jordanian figure in the [Palestinian] territories. Twenty years ago [if] the police wanted to interrogate the mufti, they would call and invite him, but coming to a 75-year-old’s home like that at 5am is unacceptable,” the official was quoted as saying.

The arrest came after Palestinians on Friday prayed at an area by the Al-Rahma gate, located inside occupied East Jerusalem’s Al-Aqsa Mosque complex, for the first time in 16 years.

It is a passageway of gates and a stairway leading to a hall that had been closed by Israeli authorities for years, and was reopened on Friday by Muslim religious officials. The hall is located a short distance from Al-Aqsa Mosque itself.

The Israeli authorities closed the area in 2003. In 2017, an Israeli court upheld the closure order.

But on Friday, the Religious Endowments Authority, a Jordan-run agency mandated with overseeing East Jerusalem‘s Muslim and Christian holy sites, announced the reopening of the mosque.

Salhab opened the doors of the hall, and worshipers performed Friday prayers there.

Israeli police accused the Al Waqf of attempting to change the status quo at the sensitive site by convening in the closed area. 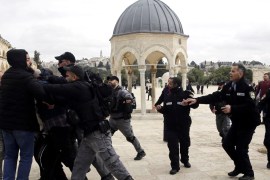 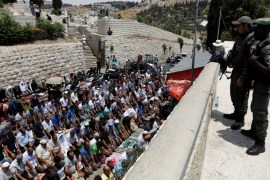 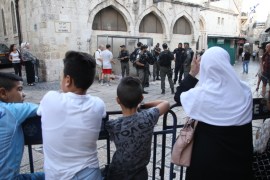