Cucuta, Colombia – Rival concerts became the backdrop of the showdown between Venezuelan President Nicolas Maduro and opposition leader and self-declared interim president Juan Guaido on Friday as the opposition prepared to bring aid across the Venezuela-Colombia border – a move Maduro has vowed to block.

Billionaire Sir Richard Branson hosted a Venezuelan Aid Live concert on the Tienditas International bridge, which connects Venezuela and Colombia, while Maduro’s government kicked off a three-day festival on the other side of the border.

Branson said he hopes to raise more than $100m to provide food and medicine for Venezuelans.

“I think that if we can persuade the soldiers to open the bridge, that’s the ideal outcome from this concert,” Branson told the Reuters news agency ahead of Friday’s concert.

“That will then mean that people who are dying from cancer because they’re not getting the right pills, or other illnesses, they will be able to get help medical help,” he added.

Just 300 metres away, the first of some 150 artists began performing at Maduro’s Hands off Venezuela festival.

“We’ll be here to denounce all the barbarity, the conspiracy, the blockades with which the United States government have been attacking the democratic stability in Venezuela,” said Dario Vivas, from the ruling United Socialist Party of Venezuela from that concert’s construction site on Thursday.

The musical tug of war is part of a power struggle between Maduro and US-backed Guaido, who declared himself interim president on January 23.

The Colombian border city of Cucuta has become the site of an aid standoff between the two men.

Guaido has the backing of the US and about 50 other countries. Maduro maintains the support of Russia, China and Turkey, among others, as well as most of the state’s institutions, including the military.

Guaido gave a Saturday deadline for the aid stockpiled on the border to be allowed into Venezuela. Most of that aid has been provided by the US.

He said he would lead a caravan of volunteers in getting the aid across by “sea, land and air”.

“On the 23rd, we will go to each and every [military] post to demand humanitarian aid be allowed in,” Guaido told reporters in Caracas.

“That they allow us to help and save lives in our country and that we make room for us to open the humanitarian channel,” he added.

But Maduro, who denies a humanitarian crisis is taking place in his country, has vowed to block the aid, calling it a “provocation” and telling US President Donald Trump that he “should worry about the poor in his own country”.

Milagro Mendes, a Venezuelan vendor who was selling water outside the Cucuta concert venue, said she thought the concert was a “very good thing”.

“Our country needs help, peace and for Maduro to give up because he destroyed the country,” Mendes, 21, told Al Jazeera.

She left Venezuela three years ago because her family couldn’t afford her schooling.

“I now send money to my father for his diabetes medication and for my mother’s heart problems,” she said.

Richard Alberto Dias, a Colombian-Venezuelan said he came to the concert to support the Venezuelan people.

“I’m here to be with the Venezuelan people that need our help, and also to tell Maduro and the politicians in Venezuela that we are the majority,” he told Al Jazeera. “And that tomorrow aid will go in whether they like it or not.”

Security on both sides of the border was ramped up this week leading up to the aid caravan and concerts.

Venezuelan Defence Minister Vladimir Padrino said on Tuesday his troops were “obedient and subordinate” to Maduro.

He warned the opposition it would have to pass over “our dead bodies” to overthrow Maduro.

“They will never accept orders from any foreign government … They will remain deployed and alert along the borders, as our commander in chief has ordered, to avoid any violations of our territory’s integrity,” Padrino said.

In a televised speech, Maduro also said he would “charge” Colombian President Ivan Duque “with any violence that might occur on the border”.

The mayor of Cucuta, Cesar Rojas Ayalla, told Al Jazeera “nothing is certain”, but he believes “Venezuelans won’t shoot against their own people, their own blood.”

Ayalla also said the city was deploying 1,500 police officers to the concert’s site.

On Thursday, Maduro said he was closing the border with Brazil and was considering doing the same with Colombia. He has already closed the maritime border with Aruba, Bonaire, and Curacoa, where some aid has been stockpiled.

A least one person was killed and several others injured when Venezuelan soldiers opened fire on members of an indigenous community near the border with Brazil on Friday, Reuters news reported.

It remains unclear how exactly the opposition plans to get the aid across the border if Maduro blocks it.

According to Reuters, opposition figures say volunteers may form a human chain and individually carry the packages over the border.

In a statement, Colombia’s migration authority said it would restrict border crossings on Saturday to people participating in the aid hand-off.

As the border tug-of-war continues under a soundtrack of Latin pop music, the humanitarian crisis between Colombia and Venezuelans worsens.

More than three million Venezuelans have fled hyperinflation and food and medicine shortages since 2014, according to the United Nations.

Maira Fernanda Carrera, a Colombian-Venezuelan attending Friday’s concern in Cucuta, said she hasn’t seen her father, who is in Venezuela, in 10 years.

“It’s not so much about the concert”, she told Al Jazeera, “but more about the world seeing what Venezuelans here at the border go through, searching for food and work.” 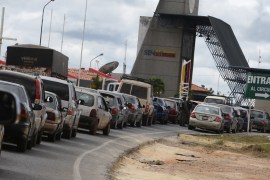 Maduro calls opposition leader Guaido’s aid caravan a ‘provocation’, says he may close the border with Colombia as well. 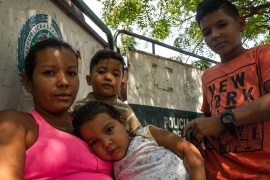