International human rights groups have renewed their call on the Philippine government to drop all charges against detained opposition senator, Leila de Lima, even as she expressed doubt about getting a fair trial while President Rodrigo Duterte is in office.

“These preposterous charges against her should immediately be dropped and the senator released.”

Nicholas Bequelin of Amnesty International said de Lima’s “prolonged arbitrary detention” is a “blatant attempt to silence her” as she continues to speak against the alleged human rights violations of the Duterte administration.

De Lima has been under detention since February 24, 2017. The justice department filed charges against her alleging that she received money from drug dealers when she was the justice secretary during the previous administration.

In an exclusive interview with Al Jazeera in December, the senator had denied the allegations, saying she has already been “pronounced guilty” even without a trial.

“This is farcical. The charges are a total, absolute lie and fabrications.”

In the two years that she has been arrested, she said the Duterte administration has subjected her to “the most vicious attack on my honour, dignity and womanhood”.

“I am a victim of political persecution, and my right to due process has been violated,” de Lima said from her detention cell at the national police headquarters in Manila.

She said the personal attacks against her have distorted public opinion, making it easier for the president and his allies to “manipulate” the legal system and justify her detention.

Earlier, de Lima had challenged her arrest and detention, but the Supreme Court denied her request.

De Lima said the only reason Duterte targeted her is that she refused to back down from her criticism of the president’s drug war.

“He [Duterte] hates strong women who stand up to him and fight him,” she said.

Human rights advocates say the death toll in Duterte’s war on drugs has surpassed 20,000 since he assumed office in 2016. A human rights watchdog said in December that the number could be as high as 27,000.

The government, however, claims the toll is much lower. According to its latest report, published in December, a total of 5,050 people have been killed since the launch of the anti-drug campaign.

FORUM-ASIA, a network of human rights advocates in Asia, said de Lima’s detention is “emblematic of the deteriorating situation for all human rights defenders” in the Philippines.

“The government’s fabricated charges against her only reflect how compromised its institutions have become under the present administration.”

From inside her jail cell, Senator de Lima continues to call out the president on the extra-judicial killings, the plan to revive the death penalty and the renewal of the martial law in the southern island of Mindanao.

“What is happening now in Mindanao is an aberration of the law. The declaration trivialises the situation there.”

In a statement to Al Jazeera, opposition senator, Benigno Aquino IV, however, defended the detained legislator “for her bravery and her untiring passion to serve the Filipino people in the face of the injustice and oppression that she is experiencing.”

‘I sometimes cry at night’

After two years of involuntary confinement, Senator de Lima said that she has learned to adjust to her daily routine, which includes reviewing pending legislation and other documents, which an assistant regularly brings to her detention cell.

“I have spent my second Christmas here, and my second birthday here,” she said. “But when you are innocent, you are not really afraid.”

“I can sleep well at night. But I must admit that sometimes I cry. Of course, I am only human,” de Lima said.

But she complained that during the summer months, she has difficulty sleeping as the temperature becomes unbearable, with only a small electric fan provided to her. To ease the heat, she would splash water in the concrete flooring of her cell to keep her room cooler.

She said that she also misses cooking at home and spending time with her 84-year-old mother, Norma, who is now suffering from dementia. They saw each other for the first time in two years just before Christmas.

De Lima said that given her political fight with the president, it is doubtful that she could be released while Duterte is in power.

“But I am sure vindication will come. I just don’t know when.”

Asked if she can forgive Duterte, she said, “The time of reckoning will eventually come. I am capable of forgiving him. But I also want justice.” 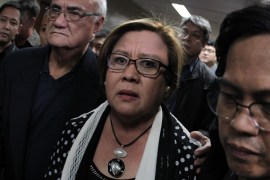 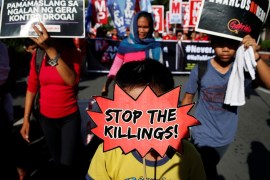 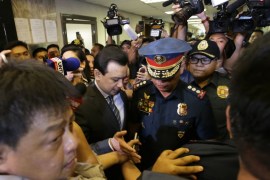 Senator Antonio Trillanes is detained in a move condemned as ‘persecution’ of opposition to President Rodrigo Duterte.