Pakistan has rejected allegations by senior Iranian officials that it is harbouring the armed group, Jaish al-Adl, which claimed responsibility for last week’s attack that killed 27 members of the elite Islamic Revolutionary Guard Corps (IRGC) in the southern province of Sistan-Baluchestan.

Javid Hussain, Pakistan’s former ambassador to Tehran, on Wednesday said suggestions that Islamabad is allowing Jaish al-Adl fighters to operate freely within its border region with Iran are “baseless and completely false”.

“We do not allow our territory to be used by terrorist organisations to target our neighbours,” he told Al Jazeera as fresh strains between the neighbouring countries begin to surface.

“I can assure you that this is a great concern for us, too, and we are cooperating with the Iranian government to make sure those elements are apprehended and brought to justice.”

On Tuesday, Brigadier General Mohammad Pakpour, a senior IRGC commander, announced that at least three Pakistanis, including one suicide bomber, conspired with three Iranians from the Sistan-Baluchestan region to carry out the attack.

Earlier, Ali Larijani, Iranian parliament’s speaker, had said that Islamabad “should be held accountable for this act involving the group orchestrating and conducting the operation from their territory”.

Amid heated rhetoric, Hussain, the Pakistani diplomat, said he does not foresee the tensions to escalate, saying that both the governments “are in touch with each other” at the national level in Tehran as well as the local level in the border area.

“There is a great deal of cooperation between the two sides,” he said, even as he acknowledged some “loopholes” along the Pakistan-Iran border.

“Both governments need to maintain friendly relations, and on the whole, we continue to maintain that relationship,” said Hussain, now the president of Lahore Council for World Affairs.

Sharmine Narwani, a Middle East analyst and former senior associate at the Oxford University, told Al Jazeera that despite the assurances, Iran might be “forced to take action” at some point, pointing to the increasing death toll among the Iranian forces at the border.

“We may be nearing that time given the heightened geopolitical tensions throughout the region, and the aggressive escalation of threats being made against Iran by the US and others,” she said.

Narwani also alleged Riyadh’s hand in the tension at the border, saying many of the leaders and members of Jaish al-Adl are graduates of the Saudi Arabia-funded schools inside Pakistan.

“Don’t forget that nine months ago, Saudi Crown Prince Mohammed bin Salman threatened to launch a battle inside Iran, which experts believed the Saudis would do by mobilising Iranian Sunni populations to trigger conflict,” she said.

Narwani said Islamabad can reign in Jaish al-Adl and other armed groups if it wants.

“The question is whether it wants to do so,” she said. “There’s a lot of geopolitical juggling going on in that region right now.”

Narwani added that “overlooking” the presence of armed groups serves a political purpose for Pakistan.

“Other times, it may simply be to not rile up a conservative population.”

Iran and Pakistan share nearly a 1,000-km long border, and there have been several cross-border attacks in recent years, including the suicide attack at Chabahar port in December 2018, and the abduction of 12 IRGC members in October 2018.

Qureshi also sent a special delegation to Tehran to hold talks with Iranian government officials about the attack.

For Tehran, pursuing diplomacy with Pakistan is always a priority over confrontation, despite recent waves of violence, Behrooz Riazi, a Tehran-based political analyst wrote on social media.

Still, Taha Siddiqui, a Pakistani journalist and founder of a news monitoring website, said that the relationship between Tehran and Islamabad is already “worsening”.

“Pakistan is ignoring its neighbours in pursuit of the petrodollars from the Saudis. This will never bring good results,” he told Al Jazeera.

“The envoy being sent to Iran will only try to calm the Iranians, but the Pakistanis are best at playing such double games.” 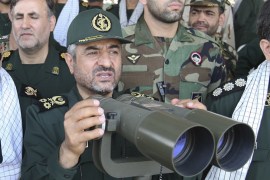 Iran warns Pakistan to crack down on Jaish al-Adl

Revolutionary Guard commander says if Pakistan fails to take action at once, Iran will take its own ‘revenge’. 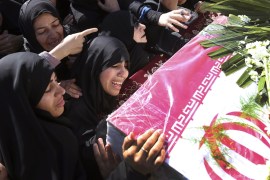 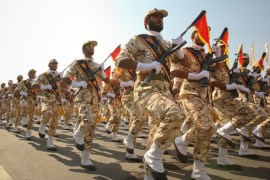 Attack on paramilitary base as Iran marks revolution anniversary

Assailants kill a member of Iran’s Revolutionary Guards and injure five in attack on Basij base in southeastern Iran.