The United States-backed Syrian fighters have said they are resolved to press on with their campaign against the Islamic State of Iraq and the Levant’s (ISIL or ISIS) last pocket in eastern Syria, denying reports they are engaged in negotiations.

Nearly a week ago, the Syrian Democratic Forces (SDF), a Kurdish-led militia allied with the US, started an offensive to expel ISIL from the village of Baghouz, the only area still under its control in Deir Az Zor province.

The SDF forces have since pinned down hardline fighters to a narrow area there, according to Kurdish officials and local activists. But snipers, bad weather, and landmines are hampering the SDF push.

A few hundred ISIL members are now boxed into an area of about one square kilometre.

“No negotiations are under way to give the remnant terrorists a safe passage,” Mustapha Bali, an SDF spokesman, told German news agency dpa on Friday. “They have no other choice than surrendering or fighting until the end.”

US President Donald Trump said on Friday the battle to wipe out ISIL was nearly complete.

“We have a lot of great announcements having to do with Syria and our success with the eradication of the caliphate and that’ll be announced over the next 24 hours – and many other things,” Trump told reporters.

Another SDF official said engineering teams were carrying out a major de-mining operation. “Since we started the offensive, our aim has been to end the presence of this terrorist group,” said Adnan Afrin, an SDF field commander.

“This operation, the rainy weather, as well as civilians – some of them are families of the Daesh fighters – are factors slowing down our progress,” said Afrin, using an Arabic acronym for ISIL.

He estimated about 1,000 civilians, including women and children, are still in the area, adding fighters were hiding among them and using them as human shields.

“We do not want to cause a massacre against civilians in the last pocket,” he said.

ISIL still has thousands of fighters and sleeper cells scattered across several countries, but the speck of terrain is all that’s left of the group’s self-declared “caliphate”, which in 2014 spanned an area the size of Britain and administered millions of people.

Successive offensives in Iraq and Syria have shattered the proto-state, which lost its key cities one after the other and has since late 2017 been confined to its traditional power base in the Euphrates valley. 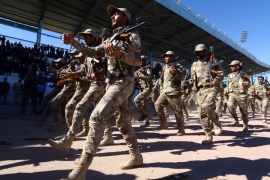 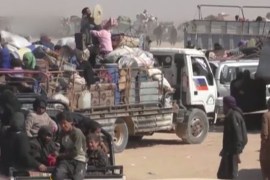 Battle for Raqqa continues after some ISIL fighters leave their self-proclaimed capital in Syria under withdrawal deal.