Democrats and rights groups have vowed to fight US President Donald Trump‘s emergency declaration along the southern border, saying it is an unconstitutional attempt to fund a wall without approval from Congress.

A key committee in the US House of Representatives announced on Friday it was launching an immediate investigation into Trump’s national emergency declaration, saying the move to fund his promised wall on the US-Mexico border raised constitutional and statutory issues.

In a letter to Trump, Democrats who control the House Judiciary Committee asked the Republican president to make available relevant White House and Justice Department officials.

They also requested legal documents on the decision that led to the declaration, setting a deadline of next Friday.

“We believe your declaration of an emergency shows a reckless disregard for the separation of powers and your own responsibilities under our constitutional system,” said the letter signed by committee Chairman Jerrold Nadler and other top Democrats on the panel.

Trump declared a national emergency on Friday after Congress passed a spending deal to keep the government open that did not include funding for a border wall.

A national emergency, if not blocked by the courts or Congress, would allow Trump to dip into funds politicians had approved for other purposes to build a border wall.

‘We’ll use every remedy available’

But the top two Democrats in Congress said they will use “every remedy available” to oppose Trump’s declaration.

House Speaker Nancy Pelosi and Senate Minority Leader Chuck Schumer said on Friday that they will take action “in the Congress, in the courts and in the public”.

They called Trump’s declaration unlawful, adding that it would “shred the Constitution” by usurping Congress’s power to control spending.

The American Civil Liberties Union (ACLU) announced its intention to sue less than an hour after the White House released the text of Trump’s declaration that the “current situation at the southern border presents a border security and humanitarian crisis that threatens core national security interests and constitutes a national emergency.”

There is no emergency. This is an unconstitutional power grab that hurts American communities. We’ll see him in court.

The coming legal fight seems likely to hinge on two main issues: whether the president can declare a national emergency to build a border wall in the face of Congress’s refusal to give him all the money he wanted; and whether federal law allows the Defense Department to take money from some congressionally approved military construction projects to pay for wall construction.

The Pentagon has so far not said which projects might be affected.

Trump relied on the National Emergencies Act of 1976, which Congress adopted as a way to put some limits on presidential use of national emergencies. The act requires a president to notify Congress publicly of the national emergency and to report every six months.

The law also says the president must renew the emergency every year, simply by notifying Congress. The House and Senate also can revoke a declaration by majority vote, though it would take a two-thirds vote by each house to override an expected presidential veto.

Beyond that, though, the law doesn’t say what constitutes a national emergency or impose any other limits on the president.

The discretion afforded to the president could make it hard to persuade courts to rule that Trump exceeded his authority in declaring a border emergency.

“He’s the one who gets to make the call. We can’t second-guess it,” said John Eastman, a professor of constitutional law at the Chapman University School of Law.

Courts often are reluctant to look beyond the justifications the president included in his proclamation, Ohio State University Law Professor Peter Shane said on a call organised by the liberal American Constitution Society.

But other legal experts said the facts are powerfully arrayed against the president. They include government statistics showing a decades-long decline in irregular border crossings as well as Trump’s rejection of a deal last year that would have provided more than the nearly $1.4bn he got for border security in the budget agreement he signed Thursday.

Opponents of the declaration also are certain to use Trump’s own words at his Rose Garden news conference Friday to argue that there is no emergency on the border.

“I could do the wall over a longer period of time,” Trump said. “I didn’t need to do this, but I’d rather do it much faster.”

ACLU Executive Director Anthony Romero said Trump’s remarks are an admission that there is no national emergency. “He just grew impatient and frustrated with Congress,” Romero said in a statement that also said the rights group would file a lawsuit next week.

Beyond the challenge to Trump’s authority to declare an emergency, lawsuits also are expected to focus on the military construction project law that allows the reallocation of money in a national emergency.

Eastman said he doubts that the Supreme Court would try to interfere with Trump’s decision to send the military to the border and then authorise the use of money from other Defense Department construction projects to build miles of a border wall.

“The president is authorized to make those judgments, not some judge in San Francisco,” Eastman said.

But the ACLU’s suit will argue that Congress allowed for flexibility in using the money it appropriated for projects needed to support the emergency use of the military forces, like overseas military airfields in wartime. 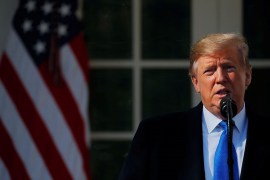 Trump signs a national emergency order for the border, setting up an expected legal battle with Democrats. 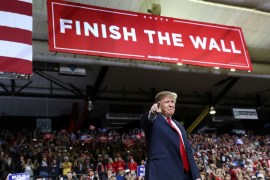