Snowfall in most parts of the Chinese capital, Beijing, has triggered a yellow alert for icy roads.

The snowing started early on Tuesday after four days of subzero temperatures.

The Beijing Meteorological Service issued the alert for icy roads on Tuesday and Wednesday. It also warned of low visibility on the roads as many people return to work following the Spring Festival holidays.

While traffic on the roads peaked with the conclusion of the holiday, highways in many cities were closed due to the poor weather conditions.

Meanwhile, the trains fared somewhat better with no significant interruptions. Railway trips in China reached 60.3 million during the holiday period (from February 4 to 10), data from the national railway operator showed.

The annual travel rush around the festival, known as “chunyun”, often puts the country’s transportation system to the test as large numbers visit their hometowns to celebrate the Chinese Lunar New Year.

This winter’s snow arrived particularly late in Beijing, only five days away from becoming the latest snowfall on record, which happened in the winter of 1983-84.

The city experienced its first snow of the season on February 6. More snow is forecast for the Chinese capital on Thursday. 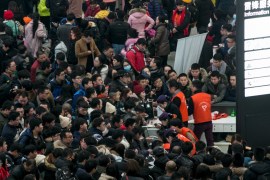 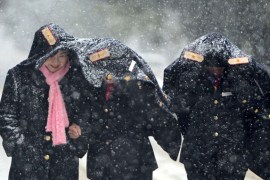 Snow chaos at the start of China’s Lunar New Year