Tehran, Iran – Iranians have taken to the streets across the country to mark the 40th anniversary of the 1979 revolution, renewing their allegiance to the country’s Islamic principles at a time of rising economic and political pressure amid the resumption of punishing US sanctions.

In his address to the demonstrators gathered at Tehran’s Azadi (Freedom) Square on Monday, Iranian President Hassan Rouhani dismissed US efforts to isolate Tehran, saying US sanctions could not break the Islamic Republic.

“The presence of people today on the streets all over Islamic Iran … means that the enemy will never reach its evil objectives,” Rouhani said, adding that the country will continue to pursue its missile programme to defend the country from external threats.

“We have not asked, and will never ask for permission in developing our missile arsenal as we continue to pursue our path to military might.”

Iran organises the nationwide rally every February 11 to highlight the size of grassroots support for the revolution, which replaced Shah Mohammad Reza Pahlavi’s government with an Islamic Republic under Supreme Leader Ayatollah Ruhollah Khomeini.

Domestically, the event is also known as Ten-Day Dawn to commemorate the period of violent protests following the February 1, 1979, return of Khomeini from exile. It also marks the official end of the 2,500 years of the Persian Empire.

In Tehran, tens of thousands of marchers gathered at Azadi Square, one of the capital’s most iconic monuments built by the United States-backed shah and renamed after the victory of the forces loyal to Khomeini. Thousands of others also gathered in other cities including the holy city of Mashhad.

Estimates of the total crowd size across the country range from hundreds of thousands to millions of people, according to different Iranian publications.

In his speech, President Rouhani added that the 1979 revolution saved the country “from tyranny, colonisation and dependence”.

“This nation has managed to establish a system of Islamic Republic and an independent system of government,” Rouhani said, as he stressed that the country has also managed to “foil the conspiracies” led by the US and Israel.

Amid rain and snow that covered parts of the Iranian capital, demonstrators marched through major streets carrying anti-US and Saudi banners and signs.

Demonstrators also chanted, “Death to America”, “Death to Israel” and “Death to the al-Saud” family of Saudi Arabia.

One demonstrator, an accountant in his 30s, told Al Jazeera that he participates in the march every year. This year, he is marching with his wife, their nine-year-old son and other family members.

The man, who asked not to be named, said that he remains loyal to the principles of the Islamic Republic, but also calls on public officials to root out corruption in the government.

Meanwhile, a woman in her 20s blamed the current economic and political woes to the country’s reformist leaders.

Security has been tightened across Iran in the lead-up to Monday’s events. Last year, gunmen dressed in fatigues opened fire at a military march in Ahvaz marking the 30th anniversary of the end of the Iran-Iraq war, killing at least 29 people and wounding scores.

Since the revolution, which united the country against the shah, the country appears today to be more divided between the hardliners, who believe in the strict implementation of laws from 40 years ago, and the reformists, who are pushing for more economic transparency and more freedoms among its population.

In 2017, President Hassan Rouhani was reelected in a vote seen a litmus test for his major accomplishment – a landmark nuclear deal signed with world powers in 2015 and the subsequent lifting of tough economic sanctions that had long strangled the country’s economy.

But last year, the US unilaterally abandoned the United Nations-backed multilateral nuclear pact, reimposed sanctions and adopted a “maximum pressure” policy towards Iran.

US President Donald Trump‘s stance aims to force Iran to negotiate the development of its missiles as well as its military presence across the Middle East . Iran rules out any such negotiations.

Trump says he has placed “the toughest sanctions ever imposed” by the US on a country. Embargoes target key sectors such as oil, banking and shipping industries to cut Iran’s oil revenues – its main source of hard currency.

Washington also wants to impact the livelihood of ordinary Iranians who have been embattled by skyrocketing consumer prices following a dramatic drop in the value of the Iranian currency, the rial, due largely to US sanctions that keep Iran’s access to hard currency in check.

The persisting severe economic hardship has angered low-income Iranians, igniting sporadic protests and strikes over the past year.

To help save the nuclear deal, Britain, France and Germany recently launched the Instrument In Support Of Trade Exchanges, a mechanism to carry out non-dollar trade with Iran and bypass Washington’s sanctions.

But while Iran and Europe work to save the nuclear pact, both the European Union and the UN have shown signs of discord over Iran’s ballistic missile activity and the accusations of assassination plots allegedly carried out by Iran on European soil. Tehran, which says its ballistic missiles will be used solely for defence purposes, denies the allegations.

“I recommend that one should not trust the Europeans, just as the Americans,” he was quoted as saying. “We don’t say, don’t have contacts with them, but it’s an issue of trust.”

Khamenei said the Iranian nation “will not abandon the ‘Death to America'” slogan as long as the US continues its “wickedness”.

The chant, which has been a signature slogan in Iran since the beginning of the revolution and still echoes during the annual commemoration of the 1979 event, means “death to American rulers”, Khamenei said, referring by name to Trump; National Security Adviser John Bolton and Secretary of State Mike Pompeo.

This year’s commemoration also comes just before a summit organised by the US in Poland’s capital, Warsaw, which is seen as an anti-Iran gathering.

Israeli Prime Minister Benjamin Netanyahu, as well as leaders from Iran’s regional rival Saudi Arabia and its allies, are expected in Warsaw on February 13 and 14 to attend the meeting, billed as aiming to promote “a future of peace and security in the Middle East”.

An announcement last month that the summit was “focused on Iran” was met with anger in Tehran and dismay in Brussels where EU officials struggle to keep the nuclear deal alive.

On Sunday, commenting on more recent statements that the Warsaw meeting will not focus on Iran, Iranian Foreign Mohammad Javad Zarif said: “The summit is doomed to failure from the start,” as the US retreated from its initial stance.

Hassan Asadi Zeydabadi, a reformist activist, said that the most effective way for the government to fight external calls for regime change is to “transition to the concept of rule of law” from the the idea of “expediency”.

“Regime-change is still considered a threat to the Islalmic Republic mainly as a result of a lack of development in democratic structures,” he told Al Jazeera.

“By transitioning to the concept of the rule of law, regime change would lose its meaning. Otherthrowing a democratic regime would become meaningless.” 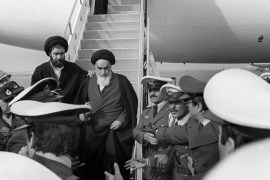 40 years on: Khomeini’s return from exile and the Iran revolution

Return 40 years ago a key moment in revolution’s success, paving way for Iran to recast its regional role and alliances. 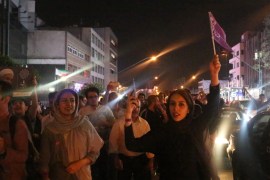 Iran’s young people speak nostalgically of a more liberal time before the revolution, the Iran they have never seen. 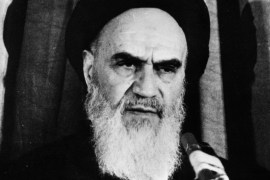 Al Jazeera spoke to those who knew the man behind the 1979 Iranian revolution that shook the world. 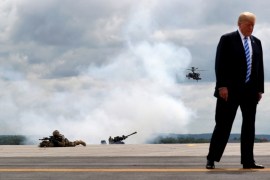 What’s the US plan for Iran?

Donald Trump sends his secretary of state to the Middle East to drum up support against Iran.