A blast of arctic-chilled air from the polar vortex brought dangerous, record-setting cold to a wide swathe of the eastern United States on Tuesday, stretching from the Dakotas through Maine, with snow expected as far south as Alabama and Georgia.

The Midwest was the hardest-hit area, with a life-threatening wind chill bringing temperatures down as low as minus 46 degrees Celsius in the Chicago area and northern Illinois by Tuesday evening, the National Weather Service reported.

Wind chills in northern Illinois were expected to fall as low as -48C which the National Weather Service called “possibly life-threatening.”

On Monday, snowplough drivers had trouble keeping up with the snow in Minnesota and Wisconsin, where some areas got as much as 38cm.

Chicago-area commuters woke up to heavy snowfall, with 13cm already on the ground. There were around 1,600 flights cancelled in and out of Chicago over the past two days.

The deadly arctic deep freeze enveloped the Midwest US, forcing widespread closure of schools, offices and prompting the US Postal Service to take the rare step of suspending mail delivery to a wide swath of the region because of the cold.

Native American tribes in the Upper Midwest were doing what they could to help members in need with heating supplies.

Many normal activities shut down and residents huddled inside as the National Weather Service forecast plunging temperatures from one of the coldest air masses in years.

The temperature in Fargo, North Dakota dropped to -33C early on Wednesday. It was -29C in Sioux Falls, South Dakota.

A wind chill advisory is in effect right through to Thursday. Temperatures are expected to get above freezing by the weekend. Chicago could even have a high of 10C on Monday which would bring a rapid thaw and the potential for flooding.

Missing the point completely, President Donald Trump used the occasion to again voice scepticism about climate change, tweeting: “What the hell is going on with Global Warming? Please come back fast, we need you!”

But the National Oceanic and Atmospheric Administration, which operates NWS, tweeted, “Winter storms don’t prove that global warming isn’t happening,” with a link to a 2015 explanatory article.

The effect of the vicious winter weather has of course been harshly felt north of the border too where there has been record-breaking snowfall.

Residents in Toronto, Canada were out shovelling their sidewalks after an overnight storm dumped up to 26.4cm of snow on the city, the biggest snowfall in a decade.

Despite being used to winter storms in Canada, there was, of course, widespread travel disruption, 202 flights cancelled, 587 delayed out of Toronto Pearson International. 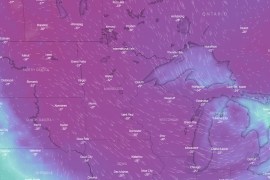 Coldest air in years advances on US and Canada

The polar vortex is expected to sink across much of North America in coming days. 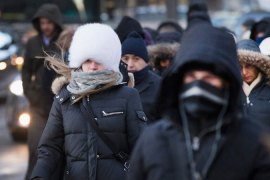 Canada and the US feel their coldest weather of the winter so far. 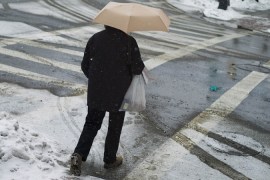 Up to 12 inches of snow and bitterly cold temperatures forecast for some parts of the region.