Lille, France – A far-right activist in France has been charged with incitement to terrorism after being exposed in an undercover investigation by Al Jazeera.

Remi Falize, a former member of the Lille branch of Generation Identity, a French far-right group, was already facing charges of aggravated assault after being filmed by an undercover reporter for Al Jazeera’s Investigative Unit assaulting a 14-year-old girl in the northern French city of Lille.

The film shows Falize, 32, wearing gloves with reinforced plastic knuckles, striking the teenager four times on the head. Following the assault, Falize was filmed boasting about the attack, saying: “Girl or not, they’re just Arabs.”

Elsewhere in the film, Falize is recorded saying: “The day I find out I’ve got a terminal illness, I’ll buy myself a weapon and cause carnage.”

The target of the “carnage” would be, according to Falize, “a mosque” or Wazemmes market, a market in Lille popular with the city’s Muslim and Arab communities.

“It will make Charlie Hebdo look like a piece of piss,” Falize declared.

The Lille prosecutor laid an additional charge of inciting racial hatred and violence for far-right activist and co-defendant Etienne ‘Le Roux’ Vanhalwyn, 23, who also faces a charge of aggravated assault on the young Lille woman.

Shortly before the assault, Vanhalwyn was filmed making Nazi toasts in a bar with several far-right associates.

Falize and Vanhalwyn, along with Guillaume Dumont Saint Priest, 31, appeared at the Lille courtroom on Wednesday, where their lawyers requested a delay to May 2020 proceedings in light of the new charges.

Outside the court, Al Jazeera reporter James Kleinfeld and freelance photographer Yann Castanier were assaulted by members of the local far right.

Saint Priest tried to grab the camera from the photographer’s hands, threatening to “beat [him] up” should he publish his photo.

Later, a man accompanying Falize out of court chased and assaulted Kleinfeld, attacking him while he was taking photos of the defendant.

The two documentaries, released on December 9 and 16, exposed violence and racism at the heart of Generation Identity (GI).

In the documentary, two former members of the European Parliament, Christelle Lechevalier and Sylvie Goddyn, are seen visiting a GI club and expressing support for the group.

Martine Aubry, the mayor of Lille, expressed shock at Al Jazeera’s findings and called for the GI property to be shut down. 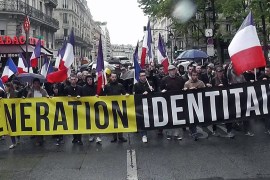 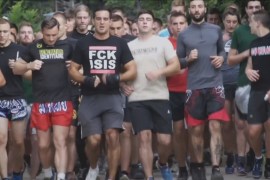 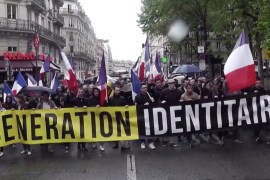