World leaders have come together in Madrid, Spain, for the UN Climate Change Conference, COP25, where they will deliberate on the environmental crisis facing humanity.

The issue of climate change, a key global conversation, has been brought to the fore by youth activists, mainly students such as Greta Thunberg, whose call for urgent climate action culminated in thousands gathering in New York City for a climate strike during the UN General Assembly in September.

At the gathering, in which more than 200,000 people marched across Manhattan, one teenager highlighted stories of a community that remains some of the most vulnerable to climate change – and yet remains under-reported: The women, children, and Rohingya refugees in Bangladesh.

Sixteen-year-old Rebeca Sabnam stood in front of a crowd of thousands, recalling the times her uncle had to carry her to school on his back during floods in her hometown Dhaka, the capital of Bangladesh.

“I am from Bangladesh, a country that exemplifies how interconnected the climate emergency is to racial justice and poverty,” she said, referencing the discourse on how people of colour are often disproportionately affected by climate change.

Sabnam later told Al Jazeera she thought that when she mentioned Bangladesh, she would hear nothing but silence. Instead, she was overwhelmed by the crowd’s roaring response.

“The climate crisis is not just an environmental issue, it’s an urgent human rights issue,” said Sabnam to the cheers of the crowd in New York.

“Bangladeshi women are extremely vulnerable to post displacement trafficking, magnified by the climate crisis,” she said. “We want Bengali women as well as the Rohingya people living in Bangladeshi refugee camps to know that youth around the world are striking for their lives and security.”

Sabnam, a Bangladeshi American high school student, lives in New York with her family, who migrated to the country when she was six years old.

Tying in the most vulnerable

COP25 is expected to focus on a range of issues such as the global tourism industry’s work to implement climate-friendly initiatives, tracking progress on the Paris Climate Agreement 2016, and an “Intergenerational Inquiry” where global leaders will meet youth activists leading the climate change conversation.

Sabnam says she hopes there will be more “urgency” than was expressed at COP24 last year.

“We want COP25 to not simply take note of [the] alarming data [on the rise in temperature], but to advocate for the end of the funding, expansion, and use of fossil fuel,” she told Al Jazeera ahead of the two-week summit.

“I hope they address not only a transition to renewable resources but a just transition for front-line communities.”

Bangladesh remains one of the most vulnerable countries to the climate crisis with its flat topography making it more prone to significant floods. In 2016, it was ranked sixth on the Climate Risk Index.

Meanwhile, experts worry that a large surge of climate migrants is forming as a result of increasing climate risk, especially in the coastal areas of the South Asian nation of 160 million people.

This migration, causing overpopulation in inner cities, is further leading to the human trafficking of children and young women, experts say. A July UN report shows that climate change is one of the reasons that women flee home, making them more vulnerable to human trafficking.

“The issue of climate change is a silent disaster, a disaster that’s happening on a daily basis but we do not see it immediately,” says Sakil Faizullah, communication manager of UNICEF Bangladesh.

“It can’t be immediately seen or measured but the impact is felt throughout the country. For instance, if anyone travels in rural areas, the villages are not necessarily even educated, but they have an understanding that the weather pattern has changed.”

According to an April UNICEF report, 19 million Bangladeshi children are at risk owing to climate change disasters such as floods and cyclones.

Faizullah told Al Jazeera this means the education of these children – who are forced to move – is hampered, along with other facilities.

“Whenever there’s flood[ing] it actually destroys health facilities, especially the tube well, it submerges them; schools are closed down during floods. If a child is deprived of health, education, and basic drinking water – what else can you offer? These are the basic needs,” he said.

Sabnam highlighted in her September speech in New York the need for an understanding of how the effects of climate change intersect with some of the most vulnerable communities around the world. 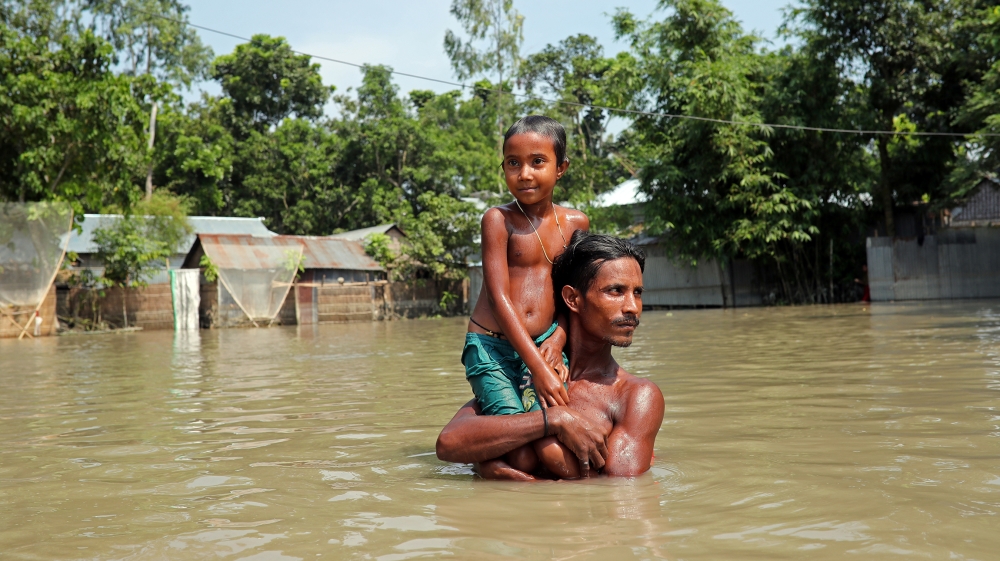 Beyond women being impacted merely due to cultural norms, the climate-induced migration in Bangladesh disproportionately affects women, says Moyen Uddin Ahmed, programme manager at the Emergency Response and Preparedness at Humanitarian Program of BRAC.

Owing to climate migration, the male figure of a household is often moving or internally displaced, which places the burden of household management solely on the women, he said.

A task as simple as securing water for the household becomes more arduous as water scarcity forces the women to travel further for collection, something that can impact their menstrual and reproductive health.

“Women are usually collecting this water from the source. The source is becoming scarce so they’re having to spend more time on this,” he said. “Menstrual and/or pregnant women carrying the water during this time is more trying.”

When it comes to the Rohingya, the location of the community’s refugee camps in Bangladesh exposes them to risks.

After the initial influx of Rohingya refugees, Ahmed from BRAC said trees were cut en masse to accommodate more people, leading to deforestation.

“The Bangladeshi mountains are not rocky, they’re small mountains,” he said. “During monsoon when there’s heavy rain, the landslide possibility increases.”

Indigenous communities, many of whom also live in coastal areas, are at a similar risk.

An Asia Pacific Forum on Women, Leadership and Development report documented how the women of the Munda Indigenous group are coping with climate challenges.

“As Indigenous peoples, they have had less political voice and as women have to contend with patriarchal social norms,” the report said.

This intersectionality remains at the heart of the solutions and needs to be brought into focus when thinking of ways to address climate risks in these countries.

Farah Kabir, country director of Action Aid, said the “lack of a holistic approach” remains a crucial challenge in addressing this intersectional layer of climate change.

As experts on the ground in Bangladesh have pointed out, at the core of climate resilience is the understanding of how it affects various communities – who do not often get a seat at the discussion table – differently.

For Sabnam, who is yet to finish school, this remains the focus of the journey ahead – how to figure out a way in which to use the current momentum to put Bangladeshi women, children, and Rohingya refugees at the forefront of the global climate change debate.

She said she is trying to make sure Bangladesh is not “forgotten along the way after the Climate Strike, and to make sure we keep consistently pushing for our demands and making sure it’s not lost along the way.”