The United Nations has strongly condemned what it has described as a “horrendous” car bomb attack in the Somali capital, Mogadishu on Saturday that left at least 78 people dead, including many students.

In a statement, UN Secretary-General Antonio Guterres extended his deepest sympathies and condolences to the families of the victims and wished a speedy recovery to those injured in the blast.

“He stressed that the perpetrators of this horrendous crime must be brought to justice,” a statement by his spokesperson said.

Saturday’s blast was the worst attack in Mogadishu since the devastating 2017 bombing that killed hundreds of people.

Police officer Mohamed Hussein said the blast targeted a tax collection centre during the morning rush hour. The explosion ripped through rush hour as Somalia returned to work after its weekend.

“The explosion was very large,” a witness said. “It was close to where the 2017 bombing happened.”

“I saw many bodies lying on the ground. In my eyes, some of the dead were police officers, but also students were killed.”

President Mohamed Abdullahi Mohamed, also known as “Farmajo”, condemned the attack as a “heinous act of terror” and blamed the al-Shabab armed group.

“Saturday’s tragedy has become a lesson learned since the country is in a state of war, we need to be vigilant against the terror attacks, since the primary goal of terrorists is to cause maximum damage to everybody,” he said.

“They are not only targeting those who work for the government but the entire population.”

Two Turkish brothers were among those killed on Saturday. Their bodies were brought back to Turkey, according to Turkey’s Health Ministry.

On Sunday, a Turkish military cargo plane landed in the Somali capital to evacuate those gravely wounded.

The plane also brought emergency medical staff and supplies, according to a tweet from the Turkish embassy, adding these had been transferred to a Turkish-run hospital in Mogadishu.

Somali Information Minister Mohamed Abdi Hayir Mareye told state media that 10 badly injured Somalis would be evacuated to Turkey. He added that Turkey had sent 24 doctors to treat those wounded who would not be evacuated.

There has been no immediate claim of responsibility for the bombing, but al-Shabab often carries out such attacks.

The armed group was pushed out of Mogadishu in 2011 but continues to target high-profile areas such as checkpoints and hotels in the seaside city as well as in neighbouring Kenya.

The capital was hit by its deadliest single attack in October 2017 when a truck bomb exploded, killing more than 500 people and wounding many more.

Al-Shabab was blamed for the truck bombing, but the group never claimed responsibility for the blast that led to widespread public outrage.

Hodan Ali, an adviser to Mogadishu’s mayor, said the human toll of such attacks is “immeasurable”.

“Last night, I sat with mothers, brothers and sisters who lost loved ones or who are nursing injured family members and you can hear the cracks in their voices, you can hear the pain that these types of atrocities have,” she told Al Jazeera from Mogadishu on Sunday.

“The support from the international community has not been zero … but it is insufficient. It is less than what Somalia needs,” he said.

“And its not just Somalia. Al-Shabab has attacked Kenya, they have attacked Uganda and then if you swing over to western and north Africa, there are terrorist groups all over. So Africa has a real terrorist problem.”

Somalia has been riven by conflict since civil war broke out in 1991 but has stabilised somewhat in recent years.

The latest attack raises concerns about the readiness of Somali forces to take over responsibility for the country’s security from an African Union force in the coming months. 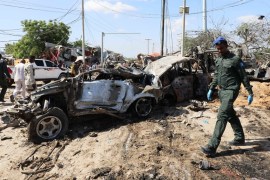 No claim of responsibility for the attack in Somalia capital that injured more than 100 people, including children. 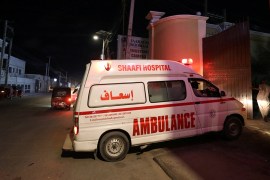