Survivors of Friday’s Kazakhstan plane crash have described the aircraft’s struggle to get airborne before the accident that killed at least 12 people, including the pilot.

The Bek Air Fokker 100 jet, with 98 people on board, crashed shortly after takeoff after departing from Almaty, Kazakhstan’s largest city, on its way to capital Nur-Sultan, according to officials.

“The plane was flying at a tilt. Everything was like in a movie: screaming, shouting, people crying,” she said.

Another survivor, Aslan Nazaraliyev, told Reuters News Agency: “The plane tilted to the left, then to the right, then it started shaking while still trying to gain altitude.”

Nazaraliyev said he had been seated next to an emergency exit in row 15 and all the rows in front of him were torn off when the plane broke in half on impact.

“We got out through the emergency exit … I and other men started getting people out and away from the plane. Some were trapped by concrete debris from the building. There were moans and screams and it was dark.”

One of those killed, electrician Abai Nurbekov, was on the plane with his family of six, news website The Village reported. His wife and four children remained in intensive care.

Authorities cordoned off the crash site in the village of Almerek, just beyond the end of the runway.

At the airport in Nur-Sultan, relatives of the passengers – some of whom were going to join their families for the holidays – were being briefed on their fate and offered flights to Almaty.

Tengrinews cited Berik Kamaliev, Kazakhstan’s vice minister of industry and infrastructure development, as saying that the plane’s black box was recovered from the site and it would be handed over to Moscow for decryption.

“Flight recorders were recovered. Tomorrow we will send a black box for decryption to the interstate aviation committee in the city of Moscow. On Monday, the work will begin,” Kamaliev said at a news briefing in Nur-Sultan.

“Those responsible will face tough punishment in accordance with the law,” Kazakh President Kassym-Jomart Tokayev tweeted, expressing condolences to the victims and their families. He also ordered an audit of all Kazakh airlines.

Tokayev declared December 28 a national day of mourning and appointed Prime Minister Askar Mamin to head a commission to investigate the crash.

The government promised to pay families of the deceased about $10,000 each.

The crashed plane was built in 1996, the government said, and its most recent flight certificate was issued in May 2019.

Bek Air, a low-cost carrier, made headlines in 2016 when one of its Fokkers had to land on its rear wheels after its landing gear failed to deploy fully.

The same year, the airline successfully challenged aviation authorities’ plans to make the International Air Transport Association operational safety audit mandatory for all local carriers on the grounds that such a move required changes to law rather than just government regulations. 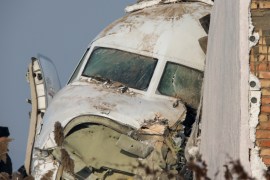 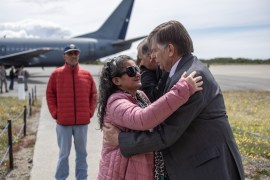 Remains of people killed in Monday’s crash brought to an airbase for DNA identification.