More than 235,000 people have fled the Idlib region over the past two weeks, the UN has said, amid air raids by Russian and Syrian government forces targeting Syria‘s last major opposition bastion.

“With the latest escalation of violence in northwest Syria, civilians in Idlib governorate are again suffering from the devastating consequences of hostilities,” it said.

Since mid-December, Russian-backed forces have pressed on with an assault on armed fighters in southern Idlib, despite an August ceasefire deal and calls for de-escalation from Turkey, France and the UN.

The increased air raids came as Damascus loyalists advanced on the ground.

They have since December 19 seized dozens of towns and villages from armed fighters amid clashes that have killed hundreds on both sides.

The advances have brought them less than four kilometres (two miles) away from Maaret al-Numan, one of Idlib’s largest urban centres.

According to OCHA, continuing battles have amplified displacement from the area and the nearby town of Saraqeb.

“People from Saraqab and its eastern countryside are now fleeing in anticipation of fighting directly affecting their communities next,” it said.

Some were forced to move more than once, like those who escaped to Saraqeb and then started moving further north.

Thousands have fled to northern Aleppo province’s Afrin and al-Bab towns, while tens of families have reportedly fled to government-held areas in Aleppo.

“This comes on top of the displacement figures that we had from the end of April to the end of August where more than 400,000 people have been displaced.

Idlib is dominated by Hay’et Tahrir al-Sham, the former al-Qaeda affiliate, whose leader this week urged armed fighters and allied rebels to head to the front lines and battle “the Russian occupiers” and Syrian government forces.

The region hosts some three million people, including many displaced by years of violence in other parts of Syria.

The government of Bashar al-Assad, which now controls 70 percent of Syria, has repeatedly pledged to take back the area.

Backed by Moscow, Damascus launched a blistering offensive against Idlib in April, in which about 1,000 civilians have been killed and more than 400,000 displaced.

Moscow and Damascus deny claims of indiscriminate bombing of civilians, saying say they are fighting “terrorists”.

Despite a ceasefire announced in August, the bombardment has continued, prompting Turkey this week to press for a fresh ceasefire deal during talks in Moscow.

On Tuesday, France called for an “an immediate de-escalation,” warning of deteriorating humanitarian conditions.

The war in Syria has killed more than 370,000 people and displaced millions since it began with anti-government demonstrations brutally crushed by security forces. 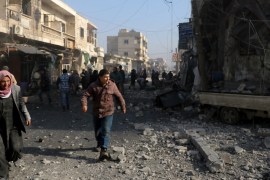 Children among eight killed in Syria as missile hits school

UN estimates 60,000 people have fled from last opposition-held province of Idlib after bombings intensified this month. 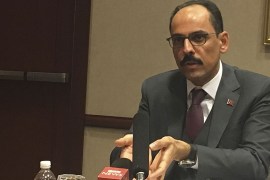 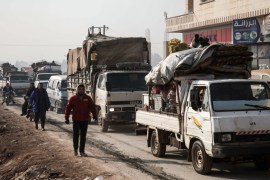