At least 11 people were reported killed and six others missing on Thursday after Typhoon Phanfone battered several central Philippine islands on Wednesday, Christmas Day, making seven landfalls before heading out to the South China Sea.

The typhoon brought chaos and a wet, miserable holiday season to millions in the mainly Catholic nation. Thousands were stranded at shuttered ports, while dozens of flights were cancelled.

Images posted on social media showed some areas in Capiz and Iloilo provinces under water. Thousands were forced to evacuate before the typhoon.

The Office of Civil Defense was quoted as saying that it is verifying reports of a dozen more fatalities.

Six others were missing in Iloilo, although ABS-CBN television channel reported that the number could be as high as 12.

As of Thursday morning, the Philippine weather agency, PAGASA, said that Phanfone was reported 155km (96 miles) west of the province of Palawan, with maximum winds of up to 130km/h (80 mph) and gustiness of up to 160km/h (99 mph).

Balasan, Iloilo suffers from heavy flooding due to strong rains brought by Typhoon Ursula on Wednesday, December 25. #UrsulaPH | via @AlertsPeapic.twitter.com/DA3qSBzh9p

Al Jazeera’s Barnaby Lo, reporting from Manila, said it could take several days before stranded passengers are allowed to travel.

“I am very sad and I have been crying for days. I told my child I can’t do anything,” one passenger told Al Jazeera. “They did not let us board the ferry because there is typhoon – and we understand that.”

Phanfone also hit Boracay, Coron and other holiday destinations that are famed for their white-sand beaches and popular with foreign tourists.

The airport at Kalibo, which services Boracay, was badly damaged, according to a Korean tourist who was stranded there.

“Roads remain blocked, but some efforts have been made to clear away the damage. It’s pretty bad,” Jung Byung Joon said. “Everything within 100 metres of the airport looks broken. There are a lot of frustrated people at the airport as flights have been cancelled.”

Another Korean tourist said she had been unable to make contact with her friend on Borocay.

“I wasn’t able to get through. Maybe something isn’t working,” said Dahae Gong. “I don’t know when I will be able to go home.”

Though weaker, Phanfone was tracking a similar path as Super Typhoon Haiyan – the country’s deadliest cyclone on record which left more than 7,300 people dead or missing in 2013.

The Philippines is the first major landmass facing the Pacific cyclone belt.

As such, the archipelago is hit by an average of 20 storms and typhoons each year, killing many people, wiping out harvests, homes and other infrastructure, and keeping millions perennially poor.

A July 2019 study by the Manila-based Asian Development Bank said the more frequent storms lop 1 percent off the Philippine economic output, while the stronger ones cut output by nearly 3 percent. 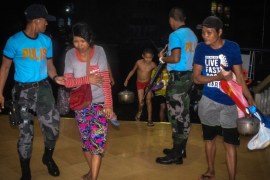 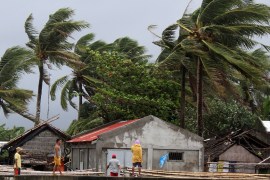 The typhoon is expected to pass near the capital, Manila, on Tuesday. 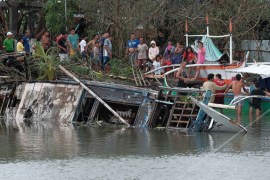 More than a dozen killed as Typhoon Kammuri exits Philippines

At least 13 people reported killed in several regions while an estimated 345,000 remain in evacuation centres.