Amid deadly protests across India over a contentious new law, one of its largest states has warned protesters it will seize their property, forcing activists to call it a “reign of terror” intended to crush dissent.

The northern state of Uttar Pradesh has demanded millions of rupees from more than 200 people and threatened to confiscate their property as a penalty for damage done to public property during protests against the Citizenship Amendment Act (CAA), seen as anti-Muslim.

The government in the state, India’s most populous, is headed by the right-wing Bharatiya Janata Party’s (BJP) Yogi Adityanath, a hardline Hindu leader who has vowed revenge on the protesters.

The state has suffered some of the most violent protests against the CAA, which gives minorities who have migrated from three neighbouring countries a path to citizenship but does not make the same concessions for Muslims.

Protesters have linked it to a proposed National Register of Citizens exercise under which every resident would have to show documents proving they are Indian citizens.

Hundreds of thousands of people across India, including university students, have joined protests against the law, posing the biggest challenge to Prime Minister Narendra Modi since he took office in 2014.

At least 18 of the 25 people killed so far in the protests have been in Uttar Pradesh, a state that has been a tinderbox for tensions between the Hindu and Muslim communities.

Nearly 230 such notices have been issued, and most of the people they had been issued to were Muslims, state government officials said on Thursday.

The claims are likely to run into tens of millions of rupees, they said.

It was unclear how many people have been charged with rioting or other crimes, and none have been convicted. State officials have blamed much of the violence on Muslim mobs protesting against the law.

In the town of Rampur, the family of Mohammad Faheem, whose brother-in-law Mohammad Mehmood is in police custody, has received one such notice.

“Mehmood did not participate in a protest and was at home that day but police still arrested him,” Faheem told Reuters news agency.

Mehmood sells spices on a cart and cannot even afford a lawyer to get bail, Faheem said. “How will we pay the fine?” he asked.

Authorities have followed the legal procedure in assessing damage to public property as well as in issuing the notices, said Mrityunjay Kumar, a spokesman for the Uttar Pradesh government.

Critics, however, said such notices are premature.

“You cannot be the complainant and the judge yourself,” Vikram Singh, a former head of police in Uttar Pradesh, told Reuters, adding that the state needed to appoint a competent authority to asses the damage.

“Sending notices to 100, pursuing 50 and succeeding in two will do more harm than good,” he said.

In the Indian capital of New Delhi, a group of activists on Thursday released a fact-finding report on the violence in Uttar Pradesh, accusing the state government of “employing unlawful and lethal tactics” on protesters.

“For the last one week, Uttar Pradesh is under a reign of terror,” said the report, which followed a visit by the activists to the most affected areas of the tense state.

The report said the police did not allow the families of two Muslims killed in Meerut, 70km (43 miles) from New Delhi, to bury them in their family graveyard.

“People have been shot in the head, in the chest and one person in the back. This clearly shows the police did not fire in self-defence or to control a restive crowd but to kill and create terror,” activist Kavita Krishnan told Al Jazeera.

The report said more than 600 people were arrested by the police, while complaints against 750 named and 28,750 unidentified persons have been filed across nine districts of the state.

“The authorities are brazenly targeting Muslims … throwing democratic norms, constitutional rights and the due process of law to the winds,” said Krishnan.

“In several places, authorities sealed shops and commercial establishments owned by Muslims. Notices have been issued to Muslims unrelated to any protest or violence to compensate for the damage to the public property,” said the report.

The Uttar Pradesh police spokesman, Shrish Chand, rejected the report, claiming no unlawful measures were taken against the protesters.

“We have only taken action against those who were involved in the violence,” he told Al Jazeera.

Meanwhile, the standoff over the contentious law continues with fresh demonstrations held on Thursday in Kolkata, Bangalore, Chennai and New Delhi.

Supreme Court lawyer Karuna Nundy told Al Jazeera that the mass uprising is about the “question of constitutionality”.

“People are holding copies of the constitution, reading its preamble, talking about how we the people were constituted to be a republic that isn’t a theocracy, but a republic based on basic rights for all,” she said. 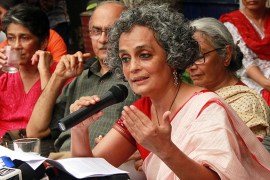 Arundhati Roy: Protests over India’s citizenship law give me hope 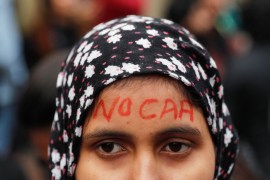