India‘s federal cabinet on Tuesday approved funds for a census and population survey to be conducted next year, amid fears that the database could be used to build a controversial citizens register.

Hundreds of thousands of Indians have taken to the streets to protest against a new citizenship law enacted by Prime Minister Narendra Modi‘s Hindu nationalist government that provides non-Muslim minorities from Afghanistan, Bangladesh and Pakistan who moved to the country before 2015 a pathway to citizenship. At least 25 people have been killed as a result of the unrest.

Many say the law discriminates against Muslims and violates India’s secular constitution by making religion a test for citizenship. They say the law and a proposed national register of citizens could be used against the Muslim minority.

The census collects data on population, economy activity, social and cultural aspects, migration and demography, down to the lowest administrative level.

The NPR is intended to create a comprehensive identity database including every resident of India.

The census and population survey will start from April next year.

Javadekar said the census exercise had no relation to the national register of citizens.

Protests, largely peaceful, continued on Tuesday in several towns and cities, including the Indian capital New Delhi, despite the refusal of permission by police to hold demonstrations.

Human Rights Watch critcised Indian authorities for what they said was the use of excessive force against demonstrators.

“Indian police, in many areas, have been cracking down on anti-citizenship law protests with force, including unnecessary deadly force,” Meenakshi Ganguly, the rights organisation’s South Asia director, said in a statement.

According to the Congress Party’s communication department, they were on their way to visit families of victims injured and killed in clashes with police, during ongoing nationwide protests against the controversial citizenship law.

The leaders were turned back from the outskirts of Meerut, 75km (45 miles) northeast of New Delhi, Rahul Gandhi later told reporters. 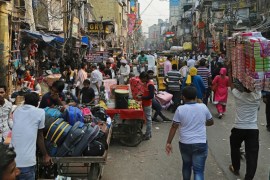 IMF calls for ‘urgent’ action by India amid economic slowdown

India’s economy grew at its slowest pace in more than six years between July-September, as unemployment remains high. 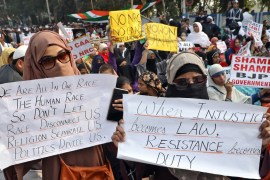